Let’s All Be Ron Heather For a Day… January 16, 2009 Guest Contributor

Let’s All Be Ron Heather For a Day…

Ron Heather is the British bus driver who refused to do his job because he saw the Atheist Ad on the side of the bus he was to drive:

“I was just about to board and there it was staring me in the face, my first reaction was shock horror.

“I felt that I could not drive that bus, I told my managers and they said they haven’t got another one and I thought I better go home, so I did.

“I think it was the starkness of this advert which implied there was no God.”

In another life, I’m sure he’s a pharmacist who refuses to dispense birth control. 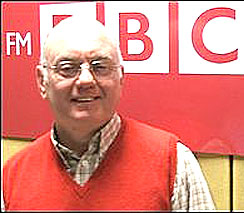 Now, what would happen if we all decided to act the way he did…?

The school you work at offers a class about the Bible? Refuse to teach.

The newspaper you’re reading has a letter-to-the-editor written by a pastor? Tell them to cancel your subscription.

The store you’re shopping at had a sign that said, “Merry Christmas”? Never give them your business again.

Stephen Tomkins of The Guardian says it well:

Considering the number of religious groups who advertise on public transport, if all drivers took Heather’s stance, the result would be pretty chaotic. No Christians, Muslims or other believers could drive an atheist bus. And if a bus had a poster with a verse form the Bible about Jesus dying for our sins, no atheist or Muslim could drive it. If it advertised the Qu’ran — you get the picture.

And what would happen with a bus that had an ad for the Qu’ran on the inside and for Jesus on the back? It could only be driven by someone who believes all religions lead to God.

In fact, speaking as one myself, I think it shows quite a cheek for Christians to make a fuss about this. We’ve spent decades covering public places with verses from the Bible, and posters promising that if you let Jesus into your life everything will be all right for ever.

Then as soon as the opposition get the money together to do the same thing we’re outraged, and think that God is as cross as we are.

The fact that Heather refused to do his job because of the innocuous ad is all the more reason we need to have ads like these out there.

In fact, if more drivers protested the ads, it’d be doing a favor to the atheists.

(Thanks to everyone who sent a link!)