One of several atheism-related stories you’ll be hearing about on Inauguration Day may be the following quarter-page ad by the Freedom From Religion Foundation, which will run in the January 20th edition of the Washington Post: 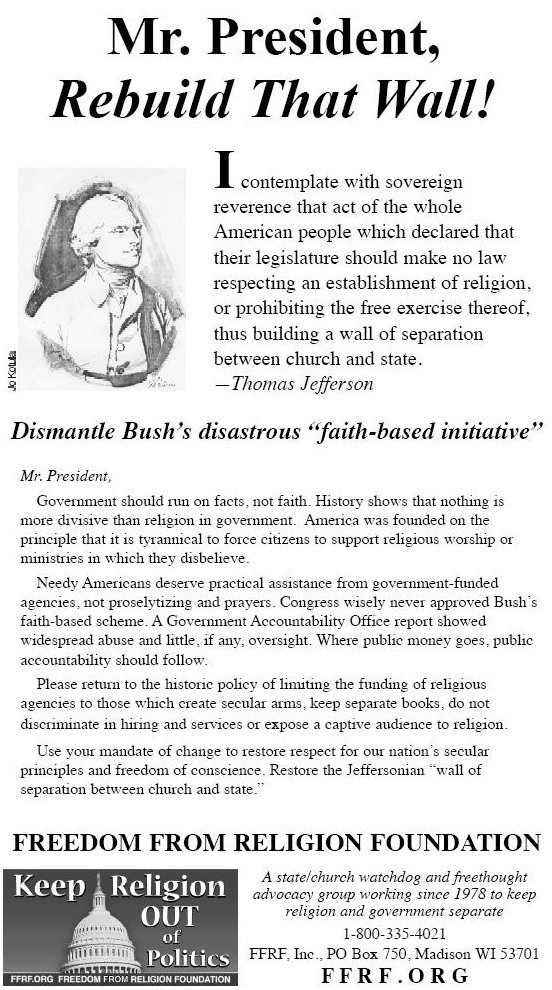 The ad will further urge the new president to “Dismantle Bush’s disastrous ‘faith-based initiative’ ” and “Restore the Jeffersonian ‘wall of separation between church and state.’ ” Government, the Foundation noted, “should run on facts, not faith.”

The Foundation’s red-white-and-blue message of “Keep Religion OUT of Politics” will also be circulating for ten hours in the Capitol Hill area on Tuesday. (The Foundation is eager to receive photographs of supporters next to the mobile billboard to post at its website.)

” ‘All the king’s horses and all the king’s men’ can’t put the faith-based initiative back together again, so let’s throw it out and go back to the simple First Amendment,” says Foundation co-president Dan Barker.

One thing I learned from the meeting last weekend was that when groups like FFRF spend incredible amounts of money for ads like this, they almost always make the money back in the form of donations and memberships.

Considering the historicity of Tuesday’s newspapers, I’m hoping that trend will continue.

January 15, 2009
Lori Lipman Brown Steps Down from the Secular Coalition for America
Next Post