Krispy Kreme To Hand Out Pro-Abortion Donuts on Tuesday

You’ll love this one.

In honor of Inauguration Day, Krispy Kreme is giving away a free doughnut on Tuesday.

Here’s what they say in their press release:

Krispy Kreme Doughnuts, Inc… is honoring American’s sense of pride and freedom of choice on Inauguration Day, by offering a free doughnut of choice to every customer on this historic day, Jan. 20. By doing so, participating Krispy Kreme stores nationwide are making an oath to tasty goodies — just another reminder of how oh-so-sweet “free” can be.

Cutesy, opportunistic, whatever. If there’s a Krispy Kreme nearby, you know you’ll want to take them up on the offer.

They think Krispy Kreme is telling you to abort babies.

It seems they don’t like the use of the word “choice”…:

Just an unfortunate choice of words? For the sake of our Wednesday morning doughnut runs, we hope so. The unfortunate reality of a post Roe v. Wade America is that “choice” is synonymous with abortion access and celebration of ‘freedom of choice’ is a tacit endorsement of abortion rights on demand.

President-elect Barack Obama promises to be the most virulently pro-abortion president in history. Millions more children will be endangered by his radical abortion agenda.

Celebrating his inauguration with “Freedom of Choice” doughnuts — only two days before the anniversary of the Supreme Court decision to decriminalize abortion — is not only extremely tacky, it’s disrespectful and insensitive and makes a mockery of a national tragedy.

Yes. Krispy Kreme was just trying to be subtle about their baby-killing agenda.

At least we now know why their doughnuts taste so delicious… 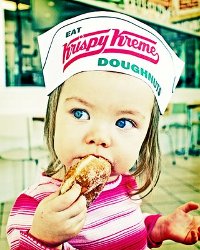 Maybe I should be worried. I gave my students a multiple-choice exam last week. Clearly, I was telling them to go have several abortions… Now, I’ll have to respond to angry parent phone calls…

(Thanks to Caitlin for the link!)

January 16, 2009 This Needs a Caption...
Browse Our Archives
What Are Your Thoughts?leave a comment