Who Wants to See Macbeth with Me? January 8, 2009 Guest Contributor

Who Wants to See Macbeth with Me?

Believe it or not, in all my years of living in Chicago, I’ve never visited the Chicago Shakespeare Theater (CST). From what I hear, it’s amazing.

They just began running a new production of Macbeth last week. Normally, that wouldn’t intrigue me… but now, I *really* want to see the show.

Because Laurie Higgins of the (Christian Right) Illinois Family Institute saw the show and can’t stop talking about it:

Anyway, the first bulletpoint says there’s simulated sex in the show. A topless scene. Not the end of the world. You see much more in R-rated movies.

I’d be surprised if anyone actually performed oral sex in the show… that’s probably suggestive. As is the risqué dancing, which doesn’t seem all that different from what I’ve seen multiple times in Rent.

It includes this warning: 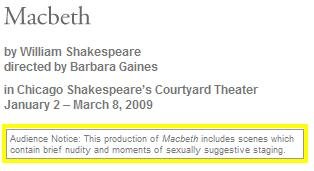 In any case, the theater should really thank Higgins. Her posting will bring in more customers than a favorable review ever could 🙂