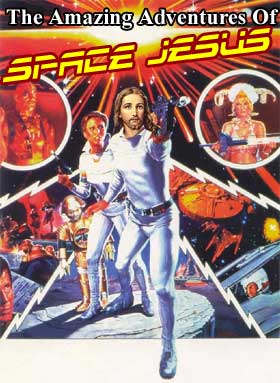 Christian filmmakers are going to be discussing how to incorporate their beliefs into science fiction movies at an upcoming conference:

Christian filmographers will take a detailed look at the widespread cultural impact that Science Fiction has had through film during the Fourth Annual Christian Filmmakers Academy (CFA) to be held January 5-7 in San Antonio, Texas…

“Sci-Fi movies of the last fifty years have provided America with more than Hollywood entertainment,” [Doug Phillips, founder of the Christian Filmmakers Academy] remarked. “The popular genre has been responsible for persuading American thrill-and-chill-seekers that fictional speculation is reality — especially in regard to the creation of the universe, life on earth, and the ‘certainty’ of extraterrestrial life.”

The Symposium will examine this remarkable transformation of fiction into perceived “fact” and explore ways Christian filmmakers can reestablish responsibility in the genre and more carefully and truthfully examine the topics of Creation, time and eternity, the human soul, and the grand potential of science and technology.

I don’t think Phillips is saying we believe Men in Black is a documentary. Rather, he seems to be implying that things like evolution are fictional. And that we “know” there is life on other planets — I’ve never heard any scientist say it’s definitive, since there’s no evidence of it. Yet.

It’s fun to use your imagination, but I don’t know anyone who believes science fiction is anything but fiction.

(Outside of Scientologists, I mean.)

And how can you talk about reestablishing “responsibility in the genre and more carefully and truthfully” examining various topics when your own beliefs include a virgin birth, resurrection, and several-hundred-year-old people?

If “Christian Science Fiction” is anything like Christian forays into other secular worlds, I guess we can look forward to watered-down, B-movies in the genre soon.

(via io9 — Thanks to Eddie and Sarah for the link!)

January 4, 2009
Since When Are Song Lyrics About Jesus Considered Religiously "Neutral"?
Next Post