An Eternal Life For Everyone — Including Atheists December 27, 2008 Guest Contributor

An Eternal Life For Everyone — Including Atheists

Ask them to explain what happened to a person like Mahatma Gandhi — a kind, non-violent, respected, revolutionary, non-Christian man — after he died.

Honest Evangelical Christians will tell you what they believe: He’s currently rotting in hell.

Atheists and Jews and gay people will suffer the same fate, too — unless they convert. (And since these Christians “love” you, they’ll do whatever it takes to “save” you from the misery.)

It doesn’t make them very popular, of course, but if accepting Jesus’ divinity is the only path to heaven, then those who don’t believe in it have to suffer forever… Right?

That seems downright cruel and unusual for anyone with a decent moral sense… and yet, it’s supposed to be a cornerstone principle for Bible-believing Christians.

So why are the results of a recent survey by the Pew Forum on Religion and Public Life so different from that idea?

Charles M. Blow writes about the survey in today’s edition of The New York Times.

Blow says that, according to this survey:

Sixty-five percent of respondents said… that other religions could lead to eternal life… Pew asked them to specify which religions. The respondents essentially said all of them.

And they didn’t stop there. Nearly half also thought that atheists could go to heaven — dragged there kicking and screaming, no doubt — and most thought that people with no religious faith also could go.

Did respondents not understand the question?

It seems like they did. Perhaps other factors played a role:

As Alan Segal, a professor of religion at Barnard College told me: “We are a multicultural society, and people expect this American life to continue the same way in heaven.” He explained that in our society, we meet so many good people of different faiths that it’s hard for us to imagine God letting them go to hell. In fact, in the most recent survey, Pew asked people what they thought determined whether a person would achieve eternal life. Nearly as many Christians said you could achieve eternal life by just being a good person as said that you had to believe in Jesus.

If you read the article, you may be as shocked as me when you see the percentage of Christians who said “living life in accordance with the Bible” is what it would take to achieve eternal life. I thought the number would be substantially higher.

A more visual breakdown of the Pew Forum’s survey is below: 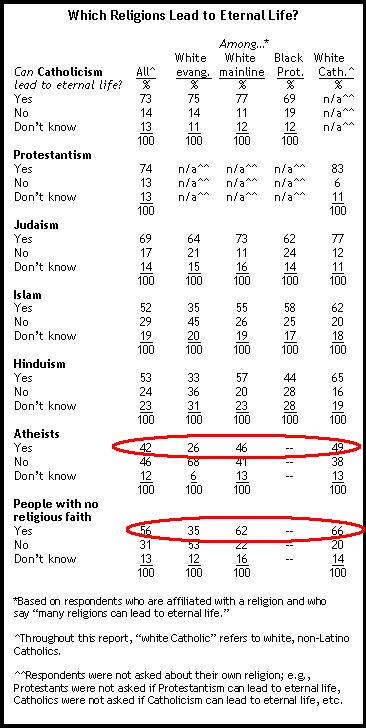 It seems like many religious Americans actually find value in a basic Humanist principle: being good for goodness’ sake.

They’d rather judge people based on their actions, not their dogma.

I’m glad to hear it.