***Update***: The article’s subject, Omar Call, responded to this post and the article about him in the comments.

We’ve all been annoyed by street preachers before. Some of us (atheists and religious people) try to avoid them altogether. Others prefer to debate them head on.

Would it be any different if the “street preacher” were preaching atheism…?

Would you avoid the person all the same? 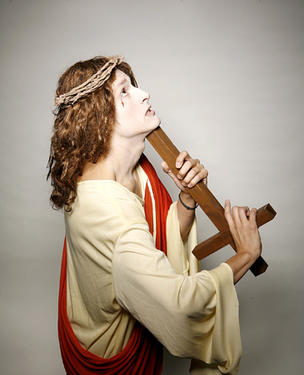 Call used to be a Mormon but later turned atheist. He couldn’t just sit around while he heard street preachers condemning others so he got onto the street and began “anti-preaching” himself:

Call has been coming to Mill Avenue every Saturday for the past three years to get flipped off, but also to have heady conversations. He particularly relishes debating the Christian street preachers who’ve sermonized on this strip for close to a decade. He thinks it’s fun. The first time he did it, he says, he went home afterwards and “it was like I was on a high. I was so excited.”

On quiet nights, he stands with his signs on the street and waits for people to ask questions. Having “logical, rational” discussions and making people think is almost like a creative art project for him.

You begin to wonder about the message Call wants to send: 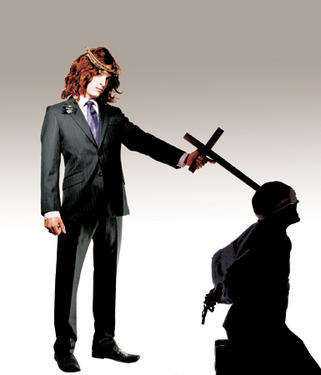 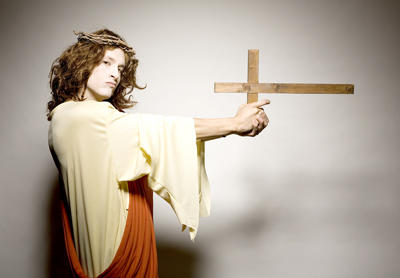 Why would you say yes to posing for those pictures…?

The sign Call holds up in order to get people’s attention isn’t any better: 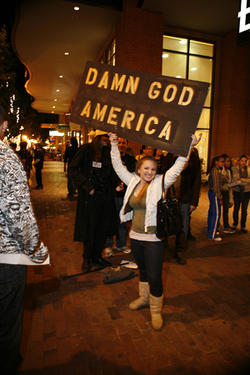 That’s obviously not him in the photo, but it is the sign. And the sign is missing a comma. Call means to say American “should damn the idea of God.”

It started with a few SFTS members handing out their own tracts on Mill, which said things like “Is this your God?” and quoted the Bible story, from the book of Kings, in which God sends bears to eat small children who mocked the prophet Elisha. Call found the tracts amusing and was happy to meet people who shared his views. But then the SFTS started bringing a microphone and more members, each one adamant about bringing his or her own philosophies to the debates.

Now things are getting out of control. On a recent Saturday night, a discussion between Call and the Christians disintegrated into anarchy when some of the atheists screamed at the preachers about how creationism is a lie and grabbed at Call’s microphone. The mic ended up being commandeered by an inebriated blond woman who was just passing by. She then was provoked by the excited crowd to deliver an impromptu, slurred sermon.

[SFTS founder Shawn] Esplin agrees with most of the points, but says he’s not sure what to do. What’s important to him, he says, is that there are voices opposing the Christians on Mill, and that the SFTS brings as many people around to “their side” as they can.

The whole thing is depressing to read.

Is this really the best way Call has found to inform people of a different way of viewing the world?

Just as many Christians are disturbed by street preachers (and anyone else who starts a conversation on religion you don’t want or have time for), I’m sorry to hear about this guy.

You can’t force atheism onto people. It’ll make them hang on to their faith even more. They have to *want* to be challenged.

Call’s intentions are very noble, but how effective can you call yourself when your conversations involve getting sworn at by children?

Call calmly says that he doesn’t believe God exists. The little boy takes his father’s hand and asks, “Well, then, who created us?”

“Nobody had to create you,” Call tells the kid.

The little boy, who looks to be about 7, shouts, “Read the Bible!”

The mother scowls and points to her chest. “God is in our hearts.”

As the family stomps off, one of the little girls, who can’t be much older than 5, turns, raises her fist in the air, and passionately yells at Call: “Damn you!”

Though he’s shocked by the little girl’s parting comment, Call laughs it off. He’s used to people getting angry. His wife and friends think his activism is amusing because they know his sense of humor, but they do worry for his safety sometimes. He’s had people get in his face and yell. He’s had drinks thrown on him.

In the end, Call says, his message is a simple one: Goodness can be godless. “If we had no religion but we could be moral, there is no contradiction there,” he says. “If we could just relax as far as the doctrine and just acknowledge that we’re all human beings and we should respect one another, we should love one another, we should help one another — these are Biblical teachings, but they’re teachings known throughout the world. Treat others as you want to be treated. This is not rocket science. It’s not so hard to figure out.”

There’s gotta be a better way to get across that message.