The Atheist Version of “Yes We Can” December 25, 2008 Guest Contributor

The Atheist Version of “Yes We Can”

The will.i.am song Yes We Can spoke about equality for all using the words of Barack Obama.

Now, the question is whether atheists are included in that mix.

With an invocation and benediction prayer being given at the inauguration (by Pastor Rick Warren and Rev. Joseph E. Lowery, respectively), atheists are saying those who do not believe in God are being considered second class citizens.

Below is a revamped version of Yes We Can created with atheists in mind — discussing religious equality for everyone.

This screenshot explains the gist of it: 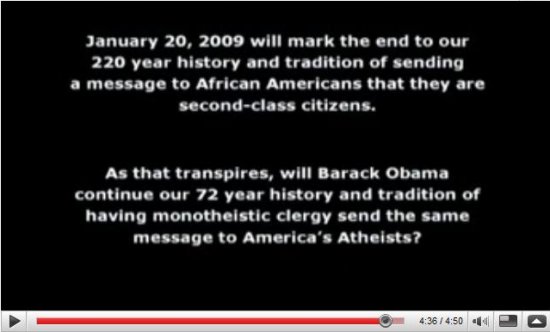