The Religious Makeup of the 111th Congress December 20, 2008 Guest Contributor

The Religious Makeup of the 111th Congress

What are the religious affiliations of members of the 111th Congress?

Pretty similar to the American public.

Except for one category…

They apparently don’t exist in Congress.

Before atheists ask the obvious question, here’s a more specific breakdown from a report released yesterday by the Pew Forum On Religion & Public Life: 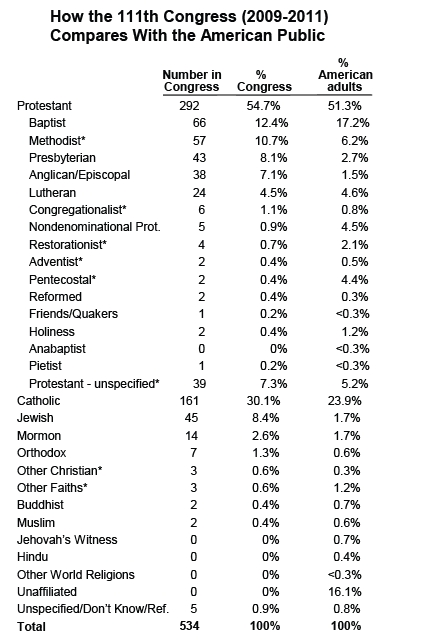 The first question that came to my mind: What about Congressman Pete Stark? Isn’t he an atheist?

Well, yes he is, but he is technically listed as a Unitarian.

(In fact, here’s a full breakdown of every Congress member along with his/her religious affiliation (PDF) — a terrific resource!)

The (mis?)categorization of Stark leads David Hume of the Secular Right blog to speculate further:

Peter Stark’s case highlights the likelihood of what is going on: there are almost certainly other “cryptic atheists” in Congress, who take advantage of the conventional assumption by Americans that affiliation with a religion connotes theism.

Hume looks at statistics about belief in God among Jewish people and surmises:

It seems very likely that many of the Jews in Congress are culturally and not religiously identified. A quick & dirty check in the [General Social Survey] suggests that Jewish confidence in the existence of God tends to decrease with education…

I’m still hoping the new Obama administration will give certain members of Congress the impetus and freedom to come out as a non-theist without fearing the worst.

By the way, who are those 5 members of Congress who are “Unspecified” or didn’t answer the question?

December 20, 2008
Giving a Talk to the Ethical Humanist Society of Chicago Tomorrow
Next Post