The Christian Right group Culture and Media Institute has put out their list of the 2008 Worst Grinches (PDF).

The winner: Playboy for putting out an issue in its Mexican edition with a seductive cover girl posed as the Virgin Mary: 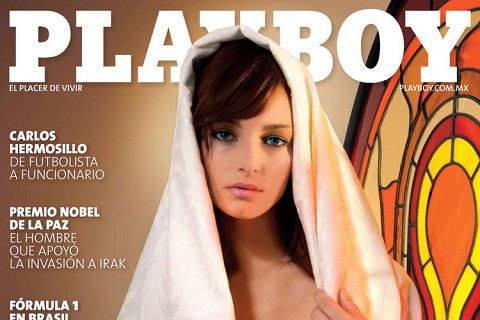 Yep. That one ruined Christmas for all Christians, I know.

Runner up? The Freedom From Religion Foundation for their “offensive” signs in state Capitol buildings.

What did they score?

Dan Barker of the Freedom From Religion Foundation said during an appearance on the Dec. 4 “Fox & Friends” that the nativity scene represents “hate speech” and “a direct attack on good human values.”

Allowing disrespectful signs to be placed near Christian displays and labeling the nativity scene “hate speech” are direct attacks against Christmas.

And in third? The American Humanist Association for their bus ads:

AHA’s Editorial Director Fred Edwords defended the $40,000 ad campaign, telling the Associated Press, “Our reason for doing it during the holidays is there are an awful lot of agnostics, atheists and other types of non-theists who feel a little alone during the holidays because of its association with traditional religion.”

Edwords used the generic term “holidays” in his defense. But by quoting a line from “Santa Claus is Coming to Town,” the AHA is clearly targeting Christmas.

That’s all it takes? Not much. They didn’t even mention the Flying Spaghetti Monster Nativity Scene…

I wonder how atheists will take the Gold next year.

December 20, 2008
Save This Canadian Student from His Science Teacher
Next Post

December 20, 2008 Giving a Talk to the Ethical Humanist Society of Chicago Tomorrow
Browse Our Archives
What Are Your Thoughts?leave a comment