Why are atheists Tiana and Kate praying outside the Discovery Institute? 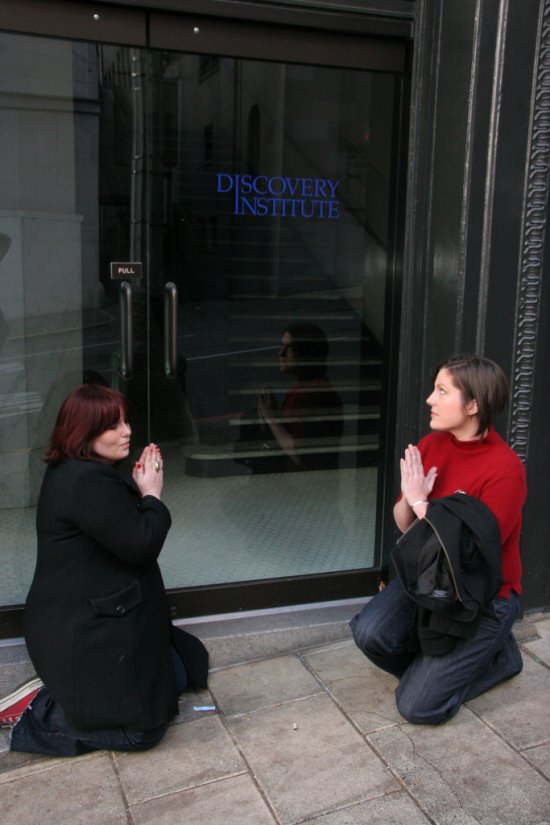 Clearly, most of you decided to answer your own reworded questions… which makes deciding the winners difficult.

Here are the Top 5 explanations… or responses (with submitters):

Due to an overabundance of Thetans, their bodies swelled just enough for their Mormon Temple Underpants, (don’t ask why – their lingerie is their own business), to cut off the circulation to their legs, thus dropping them to their knees. Knowing that they must restore blood-flow to their lower extremeties, they began a Buddhist clapping exercise designed to raise the heart-rate. At that precise moment, a wandering Quaker photo-essayist, working for a well-known TV medium, wandered by and snapped their pic for the medium’s brochure to put above a fictitious quote thanking him for reuniting someone with their long-dead ancestor.

Being in front of the DI was just weird luck.

They’re not praying. They’re doing entropy calculations to ward off the Dembski.

They’re praying there’s a working bathroom in there.

I don’t think they’re praying, I think the door only opens when you’re in the prayer stance…

“Oh, you meant we should be preying on the people inside The Discovery Institute.”

A recent poll asked 1,600 British children to “name the individual they considered the biggest celebrity.”

I think that gives new meaning to the word “Idolatry“…

But it raises another question:

In what other ways is Simon Cowell better than God?

(Thanks to Gracie for the idea!)

December 18, 2008
Stranger Writes About the Michigan Atheists Convention
Next Post

December 18, 2008 Treat Atheists Like Trolls, Says Michelle Malkin
Browse Our Archives
What Are Your Thoughts?leave a comment