Seashell Jesus By the Seashore

Quick: What do you see?! 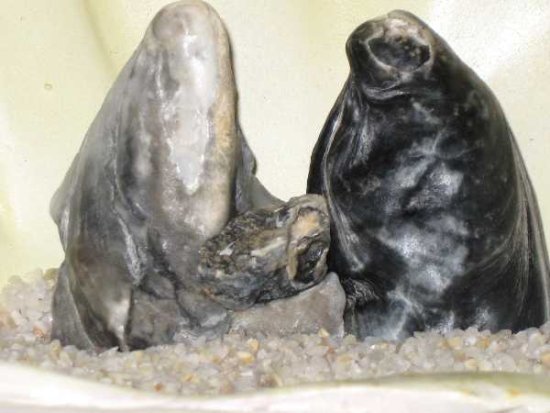 If you said three random seashells… you lose.

Even better is the story behind it:

The longtime high school friends and Jasper residents [Elaine Buchta and Diane Manley] casually were strolling along the beach in St. Augustine, Fla., two months ago when Buchta, 56, spotted a seashell and said, “That looks like Mary.”

About a minute later, Manley saw a shell and said, “That looks like Joseph.”

They both said they were “kind of freaked out” by the discoveries. They began looking for a Baby Jesus shell, but soon gave up, wondering what would such a shell look like.

[Hours later] While sitting in a chair by the water’s edge, Buchta looked down at the water washing in and suddenly exclaimed, “Oh my God, it’s Baby Jesus.”

One friend, a high school religion teacher, showed pictures to her class.

“Her kids said it was a sign, that it had to mean something,” Manley said. “Those shells found us, basically. It was like they were reaching out to us for some reason.”

You read that right. The shells found them… after the friends specifically searched for two of them over the course of a couple hours.

“Why would these shells just come to us?” wondered Manley. “I believe they were meant to be in Elaine’s possession. No money would be worth these. You can’t put a price on something like this.”…

Despite their claims otherwise, I would start the eBay countdown.

Oh, pareidolia, how we love you.

(Thanks to jedipunk for the link!)

December 17, 2008 Are You Hosting an Atheist Speaker Anytime Soon?
Browse Our Archives
What Are Your Thoughts?leave a comment