Would You Help Restore a Nativity Scene? December 13, 2008 Guest Contributor

Would You Help Restore a Nativity Scene?

Admit it: for a few minutes when you knew the Freedom From Religion Foundation’s atheist sign in Olympia, Washington was stolen, you were angry. People could disagree with it — maybe even get offended by it — but to the point that they would steal it?

How “Christian” of them.

Then the sign was recovered and all was back to normal.

So what’s your reaction when you hear that, in Georgia, Mount Carmel Christian Church’s drive-through living Nativity Scene was destroyed?

The vandals struck early Wednesday, flattening all eight scenes and backdrops that church members spent weeks building. It was the first year the church had put on the Nativity, which attracted more than 1,000 viewers when it opened last weekend, he said.

About 120 of the church’s 500 members built scenes or were participating as the actors, Sutton said. Because members donated much of the lumber and materials, the church is out only about $700. But Sutton estimated the damage at more than $2,000.

The caption to the photo below reads: “Carlos Guerra, a ministerial intern at Mt. Carmel Christian Church, examines the star that usually shines above the manger scene as staff and volunteers spent Thursday working to repair damage done by vandals.” 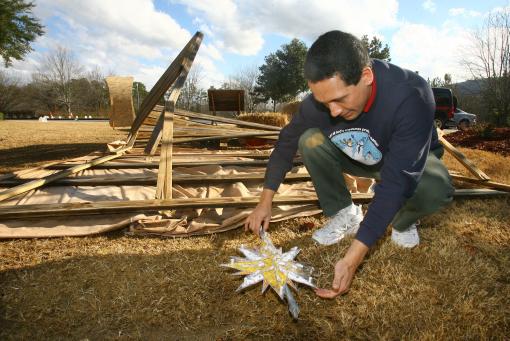 Is that a tragedy to you?

Is your reaction the same? Any different?

Would you have helped them if you lived nearby?

Dale McGowan has the right idea:

I hope and trust I am not alone in the freethought community in feeling outrage at this news. Whether or not you support the message of the display, vandalism and violence are completely out of bounds. I’ve sent messages to the Atlanta Freethought Society, Secular Coalition for America, and the Freedom from Religion Foundation urging them to take a quick public stand on this. I’ll shortly be contacting the other national organizations as well.

One of our most fundamental shared values — free expression — has been attacked. Secular humanist organizations and individuals should take an immediate and public stand condemning these actions.

Hopefully, the church’s set is back up and running now. (And I really hope atheists had nothing to do with this…)

I agree with Dale — it’d be nice to see more of us condemning these types of actions.

Not just the extreme vandalism, but even the stealing of Baby Jesuses. Not cool.

We don’t need to take or damage Christian property, anyway.

As we’ve learned from the past couple weeks, if you want to get into the heads of certain types of Christians, all you have to do is share space with them. Or wish them “Happy Holidays.”

That’s what makes them really mad.

(via The Meming of Life)

December 13, 2008
There is Now a Christmas Tree at the UNC Library
Next Post