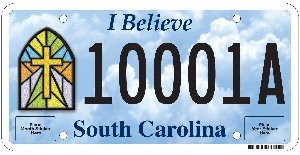 South Carolina’s “I Believe” license plates (shown in a mockup above) are not going to issued in the state, thanks to an injunction by a district judge.

In a five-page order, [Judge Cameron McGowan] Currie said she issued the injunction because federal courts would likely find the law that created the plates a gross violation of the Constitution’s ban on government establishment of religion.

Currie noted that federal courts under 4th U.S. Circuit Court of Appeals, by which South Carolina is covered, use a three-pronged test established by the Supreme Court to determine if something violates the First Amendment’s Establishment Clause. The so-called “Lemon Test” requires that any state law have a secular purpose, neither advance nor inhibit religion as its primary effect and not lead to “excessive entanglement” between religion and government.

“Based on the record now before the court, the court finds it unlikely that the I Believe Act satisfies even one of these three requirements. As the act must satisfy all three requirements to survive constitutional scrutiny, the court concludes that plaintiffs have made a strong showing of likelihood of success,” Currie wrote.

Good decision. We don’t need the government promoting Christianity over other faiths or no faith.

My favorite part of the decision is probably the list of plaintiffs challenging the plates:

Not an atheist group in the bunch.

It’s not that we shouldn’t be on the list; it’s that we don’t need to be on the list. There are people from other backgrounds who also believe this is wrong. With the help of Americans United for Separation of Church and State, they helped put a stop to these inappropriate plates.

Also amusing from the court order? The last part, in which Judge Currie sounds like the Voice of God herself: 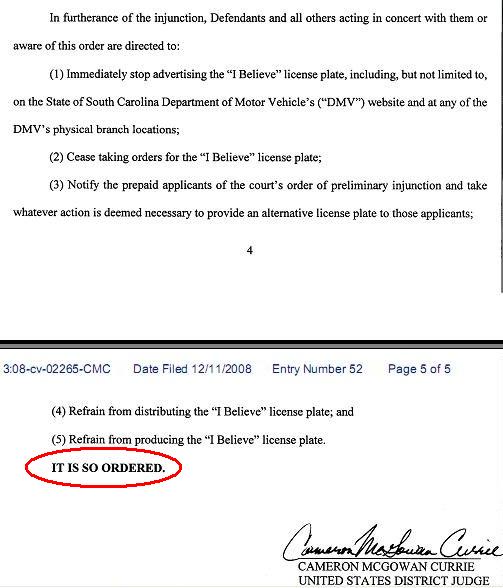 One last thing: South Carolina’s largest newspaper, The State, has an online poll on this issue. They ask:

Do you think this ruling is fair?

Right now, the nays have it. 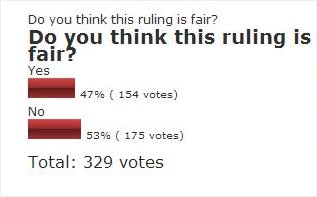 That needs to change. 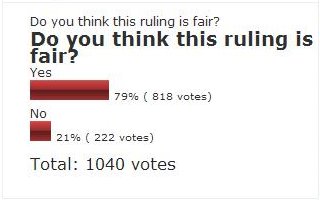 If the Christians want to publicly display their faith, they can use bumper stickers, Dashboard Jesuses, etc.

They don’t need taxpayers supporting them in their efforts.

December 13, 2008
Would You Help Restore a Nativity Scene?
Next Post

December 14, 2008 Tree of Knowledge Video Footage
Browse Our Archives
What Are Your Thoughts?leave a comment