The Freedom From Religion Foundation has this sign up in the Olympia, Washington Capitol building: 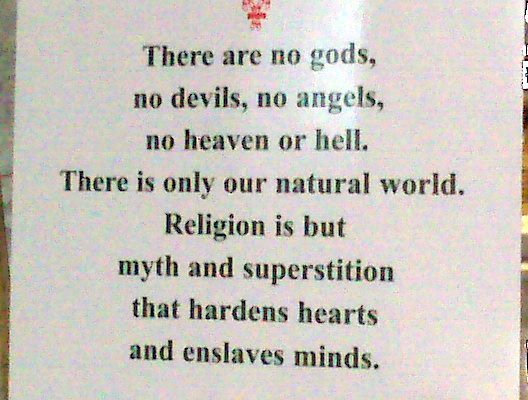 First, a quick update: the nativity scene and atheist sign are now joined by other displays:

Someone applied to put up a “Festivus” pole in honor of the invented holiday featured in the 1990s sitcom “Seinfeld.” Another person wants to create a religious-themed “balloon display.”

A protest against the sign is scheduled for today afternoon.

Now for what I wanted to get to: Since the government should not be promoting one religion over another, or religious faith over atheism, I applaud FFRF for having the balls to put a sign with their beliefs alongside the nativity scene.

That said, I don’t think the sign itself will change anybody’s mind in favor of atheism.

If there are any currently religious people who are swayed to abandon their faith by the wording “Religion is but myth and superstition that hardens hearts and enslaves minds,” I’d like to meet them.

Perhaps the conversations that begin as a result of the sign could do it. But not the sign itself. If anything, the sign just makes religious people dislike atheists even more than they do now. It makes quieter atheists dislike the more vocal among us.

Looks like there are other atheists — in the state of Washington — who aren’t fans of the sign either.

We at Seattle Atheists feel that the sentiments expressed in the sign are unfortunate. We cannot endorse the language or sentiments expressed on this sign. We feel it was divisive, hostile, and does not represent a good-faith attempt to promote the separation of church and state. In fact, we feel it has done damage to the public perception of atheism.

Seattle Atheists feel that a statement relating directly to the separation of church and state, or a seasonal gesture of universal goodwill and equality would be appropriate if a non-religious sign is to be placed on public property. While the State of Washington is ultimately responsible for giving permission to place private holiday displays on public property, we place a high value on the separation of church and state and support the removal of *all* private displays from the rotunda in Olympia, including the Winter Solstice plaque.

As far as I know, no other atheist organization has openly rebuked the statement. Some individuals have, though.

Michael Amini, another atheist from Washington state and a friend of the blog, was quoted in an article saying he disliked the sign:

Michael Amini, a University of Washington student and president of the Secular Student Union, says he’s glad to see nonbelievers represented among the Capitol displays. But he doesn’t like the sign’s wording, saying it’s inflammatory and divisive.

“Right now, the atheists are the least trusted minority in the United States,” said Amini, who believes the foundation should spend its time and money trying to show people that atheists are “decent people, rational and sane, with legitimate world views. This sign does not send that message.”

I wonder what the public reaction would have been if FFRF put up a plaque that was a combination of a couple of their signs:

There are no gods, no devils, no angels, no heaven or hell.

There is only our natural world.

Reason’s greetings to all 🙂

I feel like this would’ve accomplished the same things — getting the conservatives riled up, promoting atheism, and being included among the religious displays — but it wouldn’t have included a specific barb against religion. The American Humanist Association started a much more positive dialogue with their atheist bus ads and got plenty of attention themselves (though, admittedly, not as much as FFRF’s sign).

The “enslaving minds” comment crosses the line between promoting beliefs that all atheists agree with and beliefs that even many atheists are uncomfortable with.

Kudos to the Seattle Atheists and Michael for speaking their mind. In this case, I hope other groups and people follow in their footsteps.

There’s no contradiction with supporting FFRF while not approving of every single thing they do.

You can still be a Real AtheistTM and say you don’t appreciate what the sign says.

(Thanks to Eliza for the links!)

December 6, 2008
How Christians Can Talk to Atheists
Next Post

December 7, 2008 FFRF To Put Up Atheist Sign in Illinois
Browse Our Archives
What Are Your Thoughts?leave a comment