Why Atheist Advertising is So Important December 3, 2008 Guest Contributor

Why Atheist Advertising is So Important

Last night, I received an email from a high school student named Cris.

I’m a 16-year-old atheist who lives in the D.C. suburbs and goes to a Catholic school in D.C. Because you’ve been posting about the D.C. atheist bus campaign, I thought I’d share this story with you.

I was taking the Metro bus to school this morning when I had an interesting experience. I have to take two buses, and on the first one, there was a Creationist sitting across the aisle from me. He was talking loudly to the man who sitting next to him, explaining his creationist view of the world.

He went on and on about how the Earth used to have a roof, but then the roof was broken in Noah’s flood. When the roof broke, the ozone came through. Now we breathe ozone, which is why we only live for 70 years, instead of 900.

The poor guy sitting next to him spoke little English and could only smile and nod uncomfortably. The Creationist continued to speak loudly about Genesis and the evils of evolution until the bus route ended.

When I got off the bus to transfer to my next bus, I was annoyed and stressed — who wants to hear about Genesis at 7:00 in the morning? — but when I got on my next bus and sat down, lo and behold, in front of me were the words, “Why believe in a god? Just be good for goodness’ sake.” 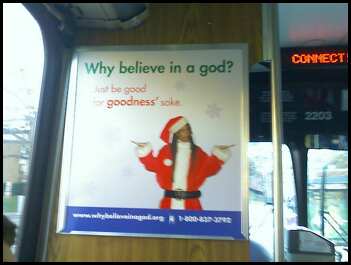 The American Humanist Association mentioned that one of the reasons they wanted to do this ad campaign was because some atheists feel alone over the holidays. Well, this morning when I had to listen to a Creationist try to convert everyone in earshot while I was heading to a Catholic school where I am one of only a handful of atheists, I felt alone. That ad on the bus reminded me that even when I feel like I am the only one standing up for truth, there are others out there who are doing the same thing.

I am not alone.

Neither are the thousands of people who can’t (or won’t) admit they feel the same way.

It’s not too late to donate to the American Humanist Association ad campaign here. The money will be doubled if you contribute before the end of the year.