Eye for an Eye?

(There’s a NSFW image at the bottom of this post, just fyi.)

You may have already heard this disturbing story: An Iranian man (Majid Movahedi) blinded a woman (Ameneh Bahrami) with acid in 2004 after she refused a marriage proposal from him.

“I decided to splash acid on her face so her husband would leave her and I could have her,” he told the court. He said he had earlier contemplated suicide.

Asked if he would still be prepared to marry Bahrami despite her injuries, Movahedi replied: “Yes. I love her.”

Now, he has been sentenced in this crime: He, too, will be blinded in both eyes from drops of acid.

The punishment is legal under the sharia code of qisas, which allows retribution for violent crimes. The court also ordered Movahedi to pay compensation to the victim.

This punishment is partly due to a plea from his victim. She wanted to make sure he never hurt women ever again.

Asked by the judge if she wanted Movahedi’s face to be splashed with acid, she replied: “That is impossible and horrific. Just drip 20 drops of acid in his eyes so he can realise what pain I am undergoing.”

Everywhere I’ve seen, the response has been mixed. Some people think this punishment is just and deserved — literally, an eye for an eye, right? Others think this is unnecessary and cruel.

Normally, I’m against the death penalty. Right now, I side with the people who find the punishment cruel. But I feel like I could be convinced otherwise.

Don’t let this image of Ameneh Bahrami influence you at all: 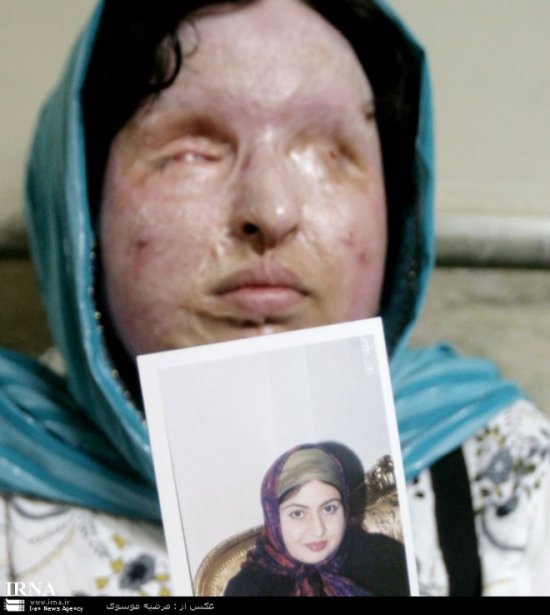 SarahH writes this in the Forums:

… the legal system should be a way to make sure our brains trump our guts in situations this serious, and religious law apparently has a lot of catching up to do in Iran.

Where do you stand on this matter?

December 1, 2008 An Atheist in Christian Clothing: What Should He Do?
Browse Our Archives
What Are Your Thoughts?leave a comment