Members of the Colorado Coalition of Reason (COCORE) recently paid to put up 11 atheist billboards, a variant of a common billboard being put up by local groups around the country:

Two of those billboards will not be going up, though, because Christians complained to the media company owning the billboard space, Next Media, which then said no to carrying the atheists’ message.

The obvious question: Who cares what the Christians think in this case? The billboards are not about them. They’re not even mentioning, much less attacking, their beliefs.

As one blogger implies, how can the atheist billboard be considered offensive when the following type of billboard can be found all over the place without problems? 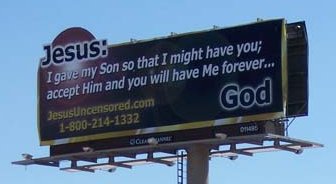 Yet, the Christians persist. Already, there have been threats from them:

Much of it has been directed at Joel Guttormson, who mostly has been serving as a spokesman for COCORE, as they call it.

Twenty-two and a Metro State junior majoring in theoretical mathematics, Guttormson also is president of the Metro State Atheists, one of the 11 groups that make up COCORE.

“It’s been kind of wild, kind of outrageous,” he says of days since the billboards went up.

“It has been mostly Christians who’ve been calling and e-mailing,” Joel Guttormson said, “which is strange since the message is not directed at Christians or anyone from any religion.

“You know, if you see an ad for migraine medicine and you don’t have a migraine, why would you care?”

Almost all of the feedback, he said, has been from people who say the billboards denigrate Christians. He says he still has no idea how that is possible.

“Have you seen the billboard? Tell me where any of them mentions evil or hate. Why is everyone so mad?”

So what kinds of Christians would get upset at the mere questioning of God’s existence?

John Matson, of Denver, was so mad after seeing the Santa Fe Drive sign that he dashed off an angry letter to the billboard’s owner.

“It is a despicable act to allow that sign,” the 60-year-old man said in an interview, “and for just a few pieces of silver.”

He went on COCORE’s Web site, and it made him even angrier, John Matson said. It is trying to gather, he said, “a constituency of what I call mob rule.”

“I know they’re atheists, and my opinion is they want others to believe the same thing. The billboard misrepresents their purpose,” he said. “Their agenda is wolf-in-sheep’s clothing political. Why don’t they just say it.”

“They want others to believe the same thing?” Yes, and it’s a good thing Christians have never wanted that…

(Hell, anyone with an opinion wants others to believe the same thing. That’s not a bad thing.)

I wonder how upset Matson would be if the first word was removed from the billboard… (I imagine he’d be ok with that).

The problem is not that someone disagrees — that’s to be expected. It’s that people like Matson are trying to stifle speech.

Guttormson adds that some Christians have had the right perspective on this: they may disagree but they defend the rights of the atheists.

It’d be nice if the two camps of Christians would talk to one-another.

December 1, 2008 Not Everyone Understands How Atheists Can be Moral
Browse Our Archives
What Are Your Thoughts?leave a comment