Do You Really Support Freedom of Speech? November 28, 2008 Richard Wade
Patheos Friendly Atheist. ... Want more from the Friendly Atheist? Get our FREE Newsletters and special offers!

Do You Really Support Freedom of Speech? 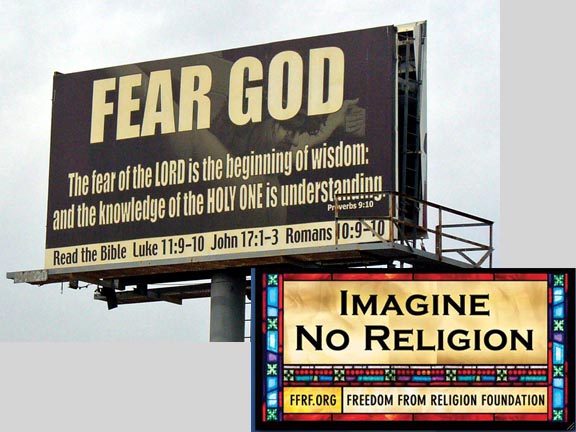 “I disapprove of what you say, but I will defend to the death your right to say it.” (Attributed to, but not actually said by Voltaire)

With all the recent controversy over billboards, I thought it might be a good time to reflect on our own attitudes toward freedom of speech. This “Fear God” billboard has been up in my home town in Southern California for many months. As far as I can find out, there have been no complaints. A half hour’s drive away in Rancho Cucamonga, as you have read, the Freedom From Religion Foundation’s “Imagine No Religion” billboard (inset) was taken down after only a few days. The City Council has denied reports that they pressured the billboard company to take it down, but they still claimed that City Hall had received “90 complaints.” Regardless of who is responsible in this case, one point of view is free to express while another is frequently censored.

Apparently, freedom of speech is not for everyone but is determined by majority vote on a case-by-case basis. Apparently only ninety “votes” are needed to overthrow the First Amendment and cancel someone’s liberty.

When asked, most Americans will say they believe in free speech, but when they hear or read an opinion that offends their views or beliefs, sadly many are either glad or apathetic if that opinion gets unconstitutionally suppressed. If you say you believe in free speech, then here’s a test, a chance to look into your heart and see if that is really true:

Imagine that the sign shown below proclaims a message that is offensive to your opinion, is the opposite of your opinion or attacks your opinion. Pick something that would really anger you. Then imagine that the local government and/or the advertising company decide to take down the sign before the date agreed upon, simply because it offends them or it offends many people in the community, including you. 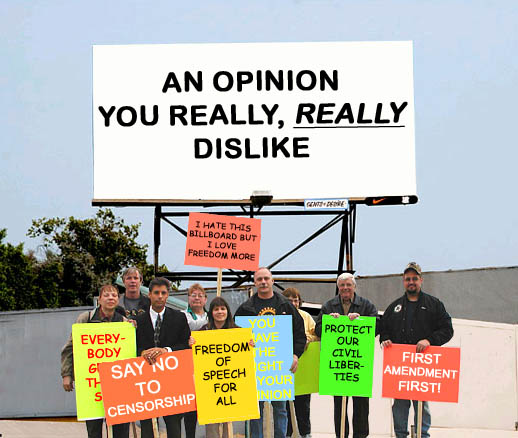 Do you respond by:

A) publicly demonstrating to support the removal of the sign?

B) approving of the removal in a letter or email to the local paper, the local government and/or the billboard company?

D) disapproving of the removal in a letter or email to the local paper, the local government and/or the billboard company regardless of your difference in opinion?

E) publicly demonstrating against the removal of the sign and insisting that free speech must be upheld regardless of your difference in opinion?

If your honest-to-your-inner-heart answer is A, B, or C, then you do not believe in freedom of speech. Your values are reflected by what you actually do in real situations, not by what you say in a hypothetical chat over a cup of coffee when nothing is on the line.

If it is acceptable to you for another’s freedom of speech to be stifled, then that includes your own freedom of speech. If the minority opinion, the unpopular opinion does not have the exact same guarantee of free expression then your opinion will eventually be forbidden as well. You’re only enjoying being in the majority opinion for the time being. The tyranny of the majority tends to increasingly demand conformity. Sooner or later you will have an opinion in the minority, the vote won’t go your way and you will be gagged.

Excuse me, I have to shout here:

EVERY SINGLE MAJORITY VIEW IN SOCIETY TODAY WAS ONCE A MINORITY VIEW WHEN IT WAS FIRST PROPOSED. EVERY WELL-ACCEPTED IDEA OF TODAY WAS CONSIDERED A HARE-BRAINED, CRAZY AND DANGEROUS IDEA WHEN IT WAS FIRST THOUGHT UP. EVERY MAINSTREAM RELIGION OR SCHOOL OF THOUGHT WAS ONCE SEEN AS A SUBVERSIVE, EVIL CULT AT ITS INCEPTION.

(Ahem.) If your sincere answer was D or much better E, then you do believe in freedom of speech.

It is ironic that the freedom of speech that the majority takes for granted is protected by a minority. Only a few people have the maturity and courage to follow Voltaire’s principle of defending even unto death the right of someone to disagree with them.