Who Took Down the FFRF Billboard in Rancho Cucamonga? November 25, 2008 Guest Contributor

Who Took Down the FFRF Billboard in Rancho Cucamonga?

Richard Wade recently mentioned the atheist billboard that was taken down near Los Angeles: 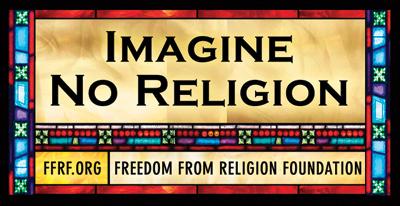 One email that was circulating around about it went like this:

On November 20, 2008, the city of Rancho Cucamonga pressured General Outdoor Advertising to remove a controversial billboard with the message “Imagine No Religion” on it because some of its citizens were offended by it.

The billboard, paid for by Freedom From Religion Foundation, a national non-profit advocacy group for atheists and agnostics, included only the words “Imagine No Religion” and the contact information of the organization. The billboard was to stay up throughout the holiday season, but was abruptly taken down when Rancho Cucamonga city administrators demanded that the billboard company do so.

“This is a serious overstep by the city over the boundaries of the First Amendment,” stated Stuart Bechman, President, Atheists United. “It’s hard to imagine a more innocuous statement of non-belief. But even this was too much for political leaders who are clearly in the pockets of some religious leaders to suppress any expression of views that diverge from the orthodox line.”

“City leaders have demonstrated their clear bias towards protecting and providing special privileges to their favored religious beliefs, in clear violation of the California and United States Constitutions. I would like to think that few Christians are so insecure in their faith as to support this action.”

Atheists United and other civil-rights organizations expect an apology to all freethinkers from the city and an admission of error on their part; and if they refuse, for the California Attorney General’s office to open an investigation on the illegal actions taken by the city.

Reader Jim from Illinois wrote to Rancho Cucamonga city officials about this. He was angry that the city would want this sign taken down. What about free speech? Would they have done this if it were a Christian or Jewish billboard?

The response he received makes it sound like the city was perfectly fine with the atheist billboard. Instead, it was the billboard company that took down the advertising on their own:

The advertisement that you refer to could go up or down or changed anyway the billboard company wishes to at any time like any other billboard without any approval or permit by the City. These are purely private sector business decisions with no input by the City.

Again, I want to thank you for your email. The City of Rancho Cucamonga appreciates your thoughts and concerns and I sincerely hope that this response has answered your concerns.

So, who’s to blame for the billboard takedown?