Barney the Dinosaur asks a very important question to Don McLeroy, chairman of the Texas State Board of Education. 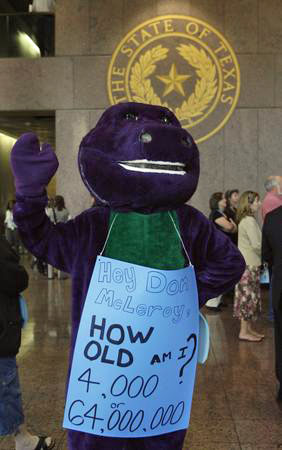 The context is below.

McLeroy has made it clear he does not accept evolution:

Dr. McLeroy believes that Earth’s appearance is a recent geologic event — thousands of years old, not 4.5 billion. “I believe a lot of incredible things,” he said, “The most incredible thing I believe is the Christmas story. That little baby born in the manger was the god that created the universe.”

But Dr. McLeroy says his rejection of evolution — “I just don’t think it’s true or it’s ever happened” — is not based on religious grounds. Courts have clearly ruled that teachings of faith are not allowed in a science classroom, but when he considers the case for evolution, Dr. McLeroy said, “it’s just not there.”

Except it makes a huge difference.

Barney came to visit because the Board was listening to testimony over “new proposed standards that would encourage middle school students to discuss alternative explanations for evolution.”

Sandhya Bathija of Americans United for Separation of Church and State quotes another Board member:

“All this hysteria has no basis in fact,” said board member Terri Leo. (Leo was amongst four board members who support introducing a Bible curriculum into public schools that has already been ruled unconstitutional.)

This “hysteria” is based in fact, and the fact is, we’ve seen the Religious Right do this before. These tactics aren’t new, and it’s great to see many Texans have caught on. The Discovery Institute and other Religious Right forces may think they’ve found a constitutional loophole to sneak creationist concepts into the classroom, but it won’t work.

Americans United has promised that a lawsuit will be filed as soon as public schools use the “weaknesses” provision to introduce religion.

Wendee Holtcamp was one of the pro-science advocates who spoke out against the Creationists. Her testimonial is incredible. Here she is giving her speech until she gets interrupted:

Despite what the creationist members of the Board say — Ms Lowe, Ms Leo, Ms Cargill, Ms Dunbar, Mr Mercer, Dr McLeroy and others — everybody in the nation knows that this is absolutely a religious battle, that your dislike of evolution and naturalism and any changes to the TEKs that are supported by the Discovery Institute are religiously motivated. Kitzmiller vs Dover clearly showed that ID and these issues are religious in nature. For you to sit there and tell everyone it is not smacks of arrogance and deliberate willful deception. In other words, lying. I know who the Father of Lies…

I look at him, confused.

“I can’t say the words lies?” I ask, incredulous…

Wendee adds that a number of a pastors spoke out in favor of evolution, too. Hopefully, more will follow.