I spoke to members of Atheists, Agnostics and Freethinkers at Northern Illinois University earlier this week. Part of the talk was about my book and part of it was advice on how to overcome the atheist stereotypes and recast our image.

The Northern Star student newspaper wrote up a nice story about the talk.

Mehta’s main focuses during his speech were to promote “the happy Atheist” and to try to help erase stereotypes of “the angry Atheist.”

“One thing Atheists need to do more is work with charity,” Mehta said. “Doing charity work without necessarily getting credit for it; Christians do that all the time and without always pushing the Bible.”

Mehta’s visit had Kathryn Panger, president of the AAFT, hinting at bigger plans in store for the AAFT. The speech left Panger wanting to build stronger relations with other religious groups on campus.

“I’ve tried before to make relations with other religious groups on campus but, I don’t know, I don’t think I’ve tried hard enough,” Panger said. “[After hearing Mehta’s speech] I’m going to try and contact them and build better relations.”

“I think his approach will help us become more known and liked,” Guca said. “I was very impressed.”

Can’t wait to see what they do!

I also liked this nifty promotional poster of the group: 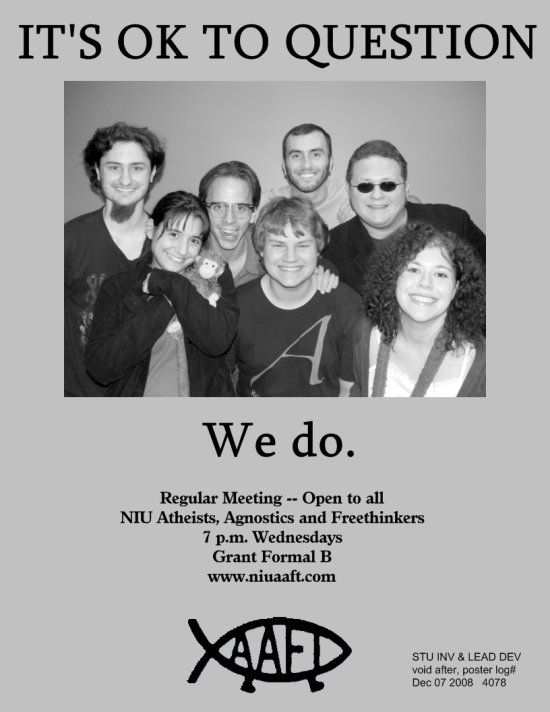 November 15, 2008
The Catholic Church and Barack Obama
Next Post