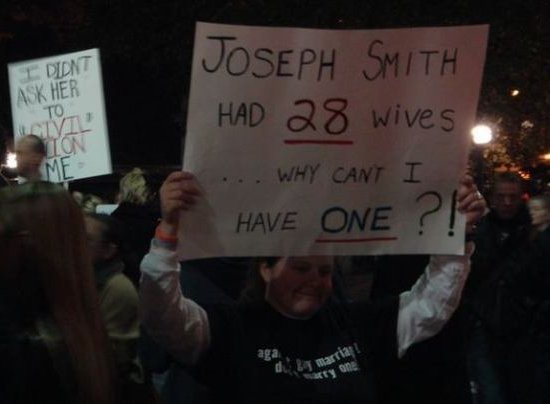 The Mormon Church gave millions of dollars to support Proposition 8 in California. The measure passed and, as a result, gay people in the state will have to wait a little longer before they obtain equal rights.

Jodi Mardesich tells an incredible story about how she was a practicing Mormon for so long but her own research into the faith drew her away from it. The Mormons’ support of Proposition 8 was the final straw that forced her to get her name off of the church membership list:

The day after the election, I wrote my letter of resignation. I sent it to the membership office of the church, telling them that I am no longer One of Them. They have to take me off their rolls. I can’t stomach being counted as One of Them. I despise what they have done in Hawaii, in California, in Arizona, in Florida. They are actively working to strip gay people of their rights. They want to define marriage as a union that can only take place between a man and a woman.

I spent much of the ’90s as a lesbian, in committed relationships with women. It doesn’t matter that I’m now in love with a man. I support the rights of gay couples to define their relationships in the traditional sense, if they so choose. I despise what the Mormon church has done to restrict the definition of a family. Love should be celebrated where it is found, whether it’s between a man and a woman, or a woman and a woman, or a man and a man. Period.

A reader of this site, Rose, also raises this question in regards to the story:

If faith is something you can give up whenever you decide you no longer agree, how can it be the truth?

I mean, I know this is one of the many reasons I cannot be a religious person, but why don’t more people have this epiphany (no irony, really)?

I would hope more Mormons (More-mons?) are realizing how their religion is (once again) acting as an obstacle to equal rights.

This story may be just a drip, but I hope the deluge will follow.

(Thanks to everyone who sent in the link!)