How Did the “Nones” Vote? November 8, 2008 Guest Contributor

How Did the “Nones” Vote?

It’s not surprising that religious Americans voted overwhelmingly for John McCain. Still, the percent of Evangelical Christians voting for the Democrat this election went up five percent from 2004 (from 21% to 26%).

That five percent change in favor of Barack Obama wasn’t the biggest change on the list, though.

That honor went to those of us not connected with any faith. 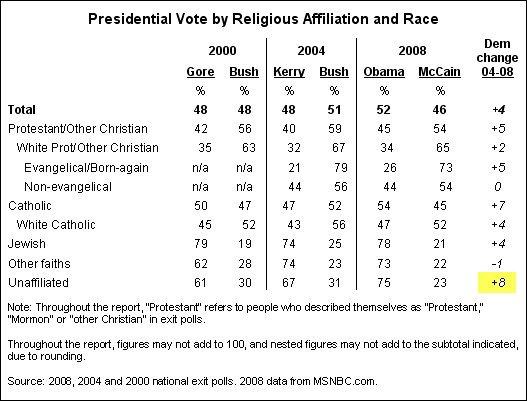 The Pew Forum says this:

In Obama’s victory over Republican nominee John McCain, the Democrats’ largest gains (eight percentage points) were seen among those who are unaffiliated with any particular religion; fully three-quarters of this group supported Obama. This group has also been a big part of the Democratic coalition in the previous two presidential elections, 61% having supported Al Gore in 2000 and 67% having supported Kerry in 2004.

Hopefully, that number will stand out to future candidates who may finally reach out to our constituency. We’re not asking for favors, just acknowledgment of our existence and fair treatment under the law for those of all faiths and no faith.

November 8, 2008
The Unfair Negative Ads in North Carolina
Next Post