The Boise State Secular Student Alliance were manning a booth for their group during a recent Parent and Family Weekend. Lloyd Lowe, the president of the group, set up the table and walked away for a while. When he returned, his found that the banner he had put up was no longer visible to the public:

Upon returning, he found his banner taped upside down. While trying to reposition it, he was approached by Brian MacDonald, director of New Student and Family Programs. MacDonald told him to speak with Director of Student Activities Kelly Stevens.

“This was an event for parents and families to come and just relax and enjoy family weekend, not engage in dialogue about religion and spirituality,” MacDonald said. “Something that is a very sensitive topic to some people, we thought that the poster should be taken down.”

What is on the banner that got everyone so worked up?

You can see it on the front page of the university’s student newspaper (PDF): 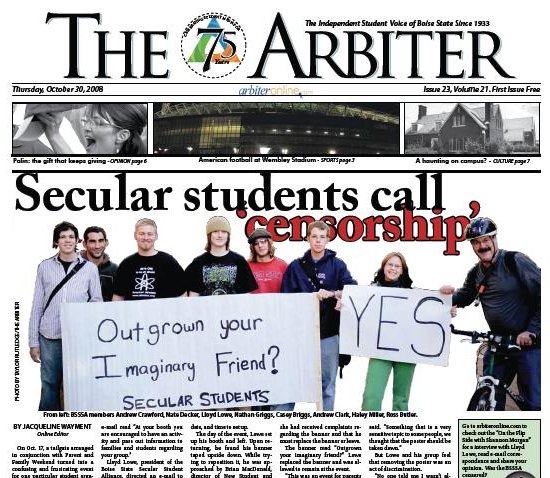 That’s it. Everyone was up in arms over the harmless question.

It’s not inflammatory at all. Yes, Lowe is calling God imaginary. As we all should. I would guess that most religious students on campus believe the same thing about all the other gods people believe in except their own.

So why is the atheist group getting punished for saying what everyone else is thinking?

Lowe writes the following in a letter to the editor:

Our banner, which appealed to reason, offended the superstitious beliefs of some people on campus. Just as their superstitious beliefs offend our sensibility and reason. When the non-religious complain about the blatant acts of proselytizing on campus they are dismissed. But when we attempt to promote critical thinking our views are suppressed. There is something wrong with this. Why is religion allowed a free pass at criticizing other beliefs (and non-beliefs) and yet immune from criticism itself?

Looking at this only in terms of religion masks a larger issue about the role of skepticism in general. We never referred to any one imaginary friend in particular. There are many and they are normally associated with childhood, like the Easter Bunny and Santa Claus. But there are many false beliefs held by adults who should know better. Bigfoot, the Loch Ness monster, UFOs, ghosts, guardian angels, numerology, psychics, and this paper even has horoscopes!

So the message I’m getting is that reason and critical thought are out, but millennia old superstitions are in. If god really didn’t want us out there asking questions I’m sure he could have handled the situation. Even Thor could have mustered a little lightning bolt. The BSU administration really didn’t have to get involved.

We are a group of students who embrace rational reasoning and empirical evidence over superstition, which we find to be just plain silly in this enlightened era. Please don’t take us back to medieval times, where the majority religion quashed and silenced other religious practices.

Perhaps it is exaggerating to say the banner takedown is a throwback to medieval times. But it is bad precendence for the school to follow. Let’s use some common sense. The banner was asking a question designed to get people thinking. A university, of all places, ought to encourage that.

On a side note, a poll on the newspaper website asks: “Do you believe the Secular Student Alliance had a right to display their banner?”

One option reads “They have a right to display their banner at any event they’re invited to on campus.”

That option is currently ahead (with 76% of the vote as I write this). You can help make sure it stays that way.

October 31, 2008
Will Someone Tell Jesus He Needs To Pick His Spots?
Next Post

October 31, 2008 Driving Under the Influence of Homeopathy
Browse Our Archives
What Are Your Thoughts?leave a comment