How low can conservatives go with under a week before the election? 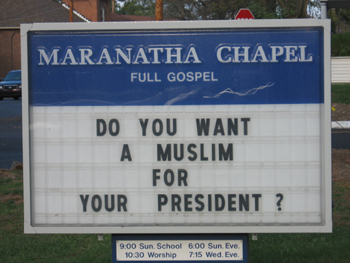 A Maranatha Chapel Full Gospel church official said this in his defense:

“All I done was ask a question! I did not implicate anybody or anything, any party. I didn’t do anything,” said the official who wished to remain anonymous.

Yep. That was all he done.

Meanwhile, Victoria Jackson — the anti-Julia Sweeney — writes this on her website:

You see, what bothers me most, besides being a Communist, and a racist (Obama writes in his book, From Dreams of My Father, “I found a solace in nursing a pervasive sense of grievance and and animosity against my (white) mother’s race.”) (Obama’s “religion” of the last 20 years is Black Liberation Theology. What is that? “It is simply Marxism dressed up in Christian rhetoric. But unlike traditional Marxism, Black Liberation Theology emphasizes race rather than class. It’s leading theorist is James Cone who says Jesus was black, African-Americans are the chosen people, and whites are the devil. Cone says, “What we need is the destruction of whiteness, which is the source of human misery in the world.” The McAlvany Intelligence Advisor), is that he is a LIAR. He pretends to be a Christian and he incriminates himself everytime he speaks about Christianity. To lie about being a believer in Christ is very dangerous. Lightning could strike him at any minute! But seriously, he doesn’t have a clue what the Bible says and yet he pretends to be a church- going Christian to win votes. That is sooooo evil.

I’m looking forward to next Wednesday morning. Hopefully, it’ll be a great day to read all the statements from the Religious Right groups telling us how the country’s doomed now that the liberals have taken over.

(Thank to Jeremy for the link)

October 30, 2008 Atheists Are on Sale
Browse Our Archives
What Are Your Thoughts?leave a comment