Marty Beckerman is the author of the recently released Dumbocracy: Adventures with the Loony Left, the Rabid Right, and Other American Idiots. 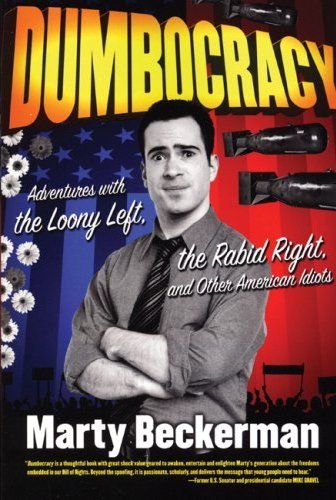 Beckerman is in his twenties and has written articles for Playboy and The Huffington Post. So it’s easy to pigeonhole him as a young liberal who leans so far to the left that he falls over.

You’d be wrong. In fact, Beckerman dislikes both sides of the political spectrum. Specifically, he dislikes the ends of the spectrum. Dumbocracy is a look at the extremists on both sides of the major cultural issues of our day: Abortion, gay marriage, the War in Iraq, etc.

I read this book in a few hours while on a plane last weekend and found that it helped the time pass by quickly. It’s not that often you get to read a very eye-opening interview with members of Fred (“God Hates Fags”) Phelps’ family and a very anti-climactic interview with the (now deceased) Jerry Falwell in the same place. Right next to a promotional blurb by former presidential candidate Mike Gravel.

His writing style is similar to Rolling Stone’s Matt Taibbi though he’s not taking a side. In fact, I thought I’d enjoy seeing Beckerman ripping on the “other” side throughout his adventures, but every time that happened, I quickly found myself reading about people on my own side of the issues displaying the same types of behavior and yelling the same kinds of annoying slogans as the opposition. It’s humbling, discouraging, and a reminder that there must be a better way to communicate our values to other people.

It’s unsettling to say the least. But funny. Very funny.

Here’s the opening line, for example:

Opinions are like genitals: if you force others to swallow yours, something is seriously wrong with you.

Ok, so this isn’t a children’s book. In fact, the ad hominem attacks (like referring to President Bush as “King Retard”) take away from a more serious critique of the people Beckerman describes. If you can see past that, though, this is an entertaining book to read. Hell, after I was done, I wanted to have a beer with the author and I don’t even drink.

A different book may have taken sides on the various issues, but that’s not the goal here. The point is really just to hold a mirror to both sides, whether you like what you see or not.

In case you think this is just a book of insults, there is actually some very impressive analysis, too.

In the chapter on abortion, I especially liked this passage:

Never mind that both sides are pro-life and pro-choice. Christians cherish the lives of babies; feminists cherish the lives of women. Christians believe that women should make better choices in bed; feminists believe that women should choose whether they’re ready for motherhood. They might actually find some common ground if everyone were to shut the fuck up for five seconds.

It’s a book marketed to liberals, but I think conservatives could find a lot of value in it. We’d be better off if we listened to what the other side had to say without getting into a shouting match. There’s power in civilized dialogue. And when you see how idiotic both sides look when the extremists get the attention, you can understand why compromise is so difficult and why we’re rarely able to make progress on the issues that matter to everyone.

More information on the book and the author can be found on Beckerman’s website.

You can also watch this promotional video for Dumbocracy!

October 29, 2008
Hate Crimes Against Atheists: Not Reported or Not Happening?
Next Post