Since Richard Dawkins is retiring from his post as Charles Simonyi professor for the public understanding of science at Oxford this week, you’ll be reading a lot about him in the next several days.

There is a nice personal interview with him in The Guardian.

In Dawkins’ view, there is a battle taking place in Britain between the forces of reason, and religious fundamentalism and it is far from won. He is one of its most famous and prolific combatants – but the question might be whether he is among its most effective. The God Delusion’s stated aim was to “convert” readers to atheism – but he admits that as a proselytising tool it has broadly failed. “Yes,” he smiles. “I think that was a bit unrealistic. A worthwhile aim, but unrealistic.”

Does he ever, I ask, envy people who believe in God?

“No.” He shakes his head firmly. Even though faith is said to be so famously comforting?

“You see,” he says, “I’m so eager to say well maybe it is comforting but so what? I suspect that for every person who is comforted by it, there will be somebody else who is in mortal fear of it.” Does he not envy those who manage not to find God mortally fearful?

“If I envied them that, then I’d have to envy people who are on some drug, which just makes them feel good. So to the extent that religion’s comforting, it’s probably not …”

… [Dawkins] never worries that one day in old age he may wake and find himself feeling drawn towards faith, though. If he did, he would put it down to senile dementia. He seems much more worried about spurious reports of a fictitious deathbed conversion being put about by his enemies after he dies. He is probably not joking at all when he says “I want to make damn sure there’s a tape recorder running for my last words.”

He also wins the award for douchebaggery for this incident:

Dawkins once described the British Airways employee dismissed for wearing a gold cross to work as having “the stupidest face”. Did he regret saying it? A slightly naughty smile flickers over his face.

“Well … well … yes, I do really. Yes. That was an unguarded moment. Although I think I said stupid-looking. Did you see the photograph of her? I think if you look up the story, and they’ve got the photograph … ” He checks himself, and stops. “But this is unkind.”

Another article in the Daily Mail confirms that he will be writing a book about science specially for children.

Included in the book?

‘Looking back to my own childhood, the fact that so many of the stories I read allowed the possibility of frogs turning into princes, whether that has a sort of insidious affect on rationality, I’m not sure. Perhaps it’s something for research.’

However, the outspoken atheist said he hadn’t even read Harry Potter and admitted he “didn’t know what to think about magic and fairytales”.

He said the book will be “science thinking contrasted with mythical thinking” and will talk about the “Judeo-Christian myth”.

That would be unfortunate. We already know he and Hermione from the movies are really the same person: 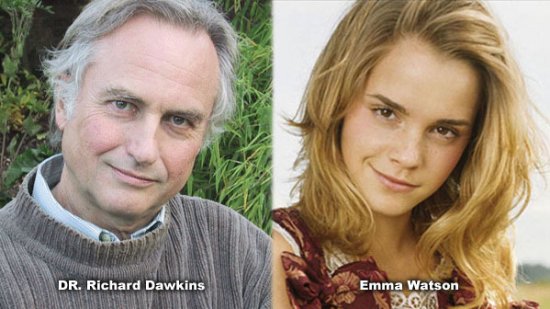 Before his children’s book comes out, Dawkins is supposed to be releasing a book about evolution aimed for adults. That book is supposed to come out near Darwin’s birthday on February 12th, 2009.

October 27, 2008 Is This Christian Law School Lying About Its Success?
Browse Our Archives
What Are Your Thoughts?leave a comment