It’s a true story, and because of that, I don’t know whether to laugh or cry.

Sam Lal, a Hindu man living in Queens, says that he found an incarnation of the Lord Ganesh in an amaranth plant. 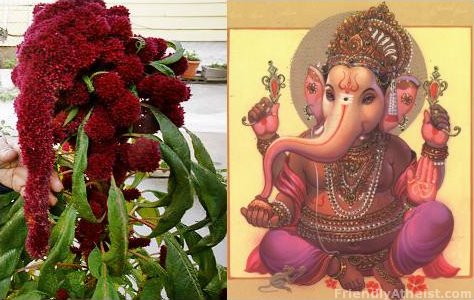 Lal said that the ailments that had plagued him for months disappeared.

“This formation came to heal my illness,” the 60-year-old Hindu man said of his relief from pain due to a bone spur near his spine and bulging discs in his neck.

“They say God comes in many forms. I figure this has taken the form of a plant to come into my yard to bless me,” said Lal, who immigrated from Guyana three decades ago.

If you know people who believe in those sightings of the Virgin Mary or Jesus in random objects like tunnels, windows, grilled cheese, etc. — and that they have the ability to heal people — show them this article.

Ask them if they believe Sam Lal’s story and whether they’re about to worship Ganesh as a result.

When they say “no,” ask them how their delusions are any different.