I Apologize for Thinking Independently 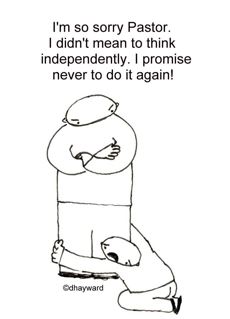 Come to think of it, we rarely hear about Christians who disagree with their pastors — and dare to say so publicly.

If you used to be a Christian, did you ever call your pastor out on anything s/he said in church because it was wrong or misguided? (That is, before you became an atheist.)

Some of you reading this are current Christians.

Has anyone in your church criticized (with good intentions) your pastor to his/her face?

Is that something that ever goes on, is it kept on the down low, or does it never happen at all?

October 20, 2008 All That is Wrong With America... in One Brief Video
Browse Our Archives
What Are Your Thoughts?leave a comment