What They Didn’t Ask at the Megachurch October 17, 2008 Guest Contributor

What They Didn’t Ask at the Megachurch

The evening was structured so that I would be interviewed by the pastor on stage about the eBay auction and my thoughts about the Christian church (about 20-30 minutes), followed by another 30 minutes or so of questions from the audience. The questions were submitted on pieces of paper while the first half of the conversation took place. Staff members collected them and weeded out certain questions (because they were too general or odd or just plain weird). The more interesting ones were given to the pastor and he selected his favorites to ask on stage.

What kinds of questions were asked?

More on the questions below.

The audience was great. They were respectful. No one bombarded me with “the love of Jesus” afterwards. No proselytizing. Good deal. 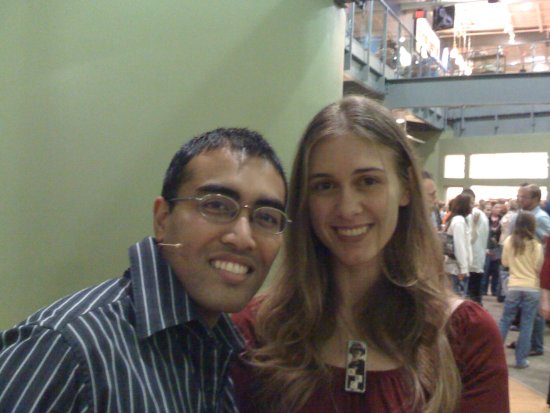 One girl came up to me afterwards along with her two friends. We had only a brief chat, but this is what I understood her story to be.

She thanked me for raising some interesting questions and getting her to think more critically about her faith.

Then she started crying.

I asked what was wrong.

Essentially, she said that she rarely gets exposed to a different point of view. She’s a Christian and her parents are Christians but they still seem to shove their faith down her throat. At the first sign that she might be challenging her faith, they stop her. If she’s hanging around people who might question her Christianity (or cause her to ever-so-slightly stray from it), they are all over her.

She’s not going to become an atheist anytime soon, but she was grateful for hearing a new perspective.

Then she had to go.

(I hope I got that story right. And if my interpretation of her story is accurate, it says a lot about what’s wrong with parents being dogmatic about their faith and trying to “protect” their children from what else is out there.)

There were a lot of questions people wanted the pastor to ask me. We could only get to a few of them because of time issues.

I was really curious which ones were weeded out…

The church staff was kind enough to pass them along.

Here are some of the questions from the un-asked pile:

A lot of those questions were echoed by others with slightly different wording.

It’s easy to just laugh at a lot of those because the answers seem so obvious to atheists.

But it’s important to realize these are among the reasons religious people have a hard time understanding who we are and why we believe the way we do. We need to have decent responses to these kinds of questions.

I’m especially curious how readers would answer that last one.

Briefly, what would you advise Christians to say to atheists so that we know they care about us?

Personally, if they talk to me like another human being and not as “he-who-must-be-converted,” that’s a good first step.

October 17, 2008
Edmond, Oklahoma Officials Try to Break Wall of Separation for the Third Time
Next Post

October 17, 2008 Female Atheists: Don't Attack Mark Wahlberg
Browse Our Archives
What Are Your Thoughts?leave a comment