Edmond, Oklahoma Officials Try to Break Wall of Separation for the Third Time

Who is depicted in the following statue? 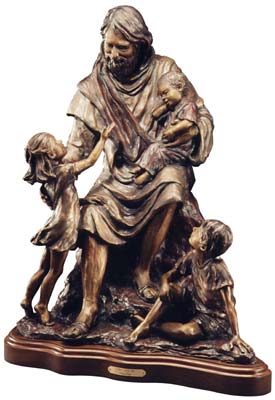 If you said Jesus, you win!

Even the artist, Rosalind Cook, says so:

This sculpture depicts Jesus with the children… I have depicted Christ more to show His character qualities. He is a bit larger than scale to signify His deity. I have shown His compassion and His love. He is strong and well built, wearing the typical attire of Biblical days and yet the children are contemporary children showing that He is the God of yesterday, today and tomorrow. His foot transcends the perimeter of the base indicating that He is accessible to all.

Which is why it’s a bit surprising that the Edmond Visual Arts Commission in Edmund, Okla. wanted to spend $3,900 of taxpayer money to put the sculpture in front of a Catholic gift shop.

June Cartwright, chair of the commission, told the Associated Press that the sculpture was viewed simply as a piece of art and is not a religious endorsement.

“It’s a piece of artwork,” Cartwright said. “It doesn’t state that it is specifically Jesus. It is whatever you perceive it to be.”

That’s the same city that, a decade ago, was forced to pay $200,000 in legal fees after losing a court battle to keep a cross on its city seal. It’s the same art commission that wanted to spend $17,500 in public funds on a statue of Moses outside Edmond’s First Christian Church. That concept was squashed following a public outcry.

Maybe the commission thought the third time was a charm.

At least there’s a happy ending to this story.

The mayor of Edmund, Okla. announced the city will not go along with the Edmond Visual Arts Commission’s decision to fund this sculpture with taxpayer money, according to a report from the Associated Press.

O’Neil said only private funding will go toward the statue.

Anyone think they’ve learned their lesson?

October 16, 2008
How Much Money Does the Religious Right Take In?
Next Post

October 17, 2008 What They Didn't Ask at the Megachurch
Browse Our Archives
What Are Your Thoughts?leave a comment