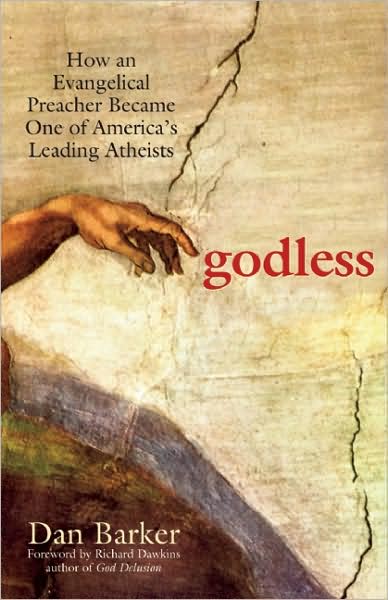 Dan is the co-president of the Freedom From Religion Foundation and the author of Losing Faith in Faith. Much of that book is reprised in this more updated version. But if you haven’t read the older book, now is the time to check out version 2.0.

Unlike most books written by atheists, Dan was the real-deal fundamentalist Christian. He was Ray Comfort and Kirk Cameron rolled into one. He was the guy “you would not want to sit next to on a bus.” He preached, wrote Christian music, “saved some souls,” and felt the presence of God… all before he came to the understanding (on his own) that it was all just in his head. Over the course of several months, he became an atheist and slowly removed himself from his former world, losing many friends in the process.

Now, he is a fervent evangelical atheist, if you can say that. It was FFRF that fought the Bush adminstration in the Supreme Court over the Faith Based Initiatives (FFRF fought for standing to have the right to sue the government over how our tax money was spent — they lost in a 5-4 decision). Despite the setback, Dan helps lead the largest atheist organization in the country and can be seen speaking or debating at campuses across the country.

The book consists of several smaller parts. In the first, Dan tells his story of going from Christian to atheist. In the second, he explains his rationale for being an atheist. That’s followed by a long series of arguments against Christianity. Finally, Dan discusses his Supreme Court case and the state of atheism in America today.

The first section alone is enough reason to get this book. For anyone who is deeply religious but has those occasional seeds of doubts, Dan knows where you’ve been and how you feel. It takes serious courage to drop the life you’ve been living for so long to pursue something that seems to be the polar opposite, but that’s what he did. In case anyone thinks he “lost his faith,” Dan corrects them:

I did not lose my faith — I gave it up purposely. The motivation that drove me into the ministry — to know and speak the truth — is the same that drove me out.

I lost faith in faith.

Dan spends quite a bit of time discussing debates he’s had, arguments he’s heard, and ways to rebut the common Christian talking points. One of them was genuinely frightening:

While many of the arguments for atheism and against religion are rehashed versions of things you may have heard before, it’s nice to see them all in one place, with commentary. They’re easily understandable and new atheists would do well to familiarize themselves with the arguments. That said, those sections get very long and don’t make for easy reading — however, they do make for a great reference.

If you haven’t heard his story, you need to read the book. I’d love to hear from life-long Christians about how accurate Dan’s depiction of religious life is, though I suspect they would be all too familiar with Dan’s brand of Christianity.

I should mention that Dan is an acquaintance of mine (the Secular Student Alliance helps coordinate many of Dan’s talks to college groups across the country). I have also received a scholarship from FFRF in the past.

That said, this book is one I would pick up even if I didn’t know who Dan was. I think this is one of the few books offering an explanation of why atheism is inspiring and rational instead of simply attacking religious people and focusing on the fringes of faith. Godless is a wonderful glimpse into the mind of a fundamentalist Christian and a useful instruction booklet for anyone needing help to break free from that world.