The Humanists and Freethinkers of Cape Fear in North Carolina set up a booth about Humanism and Freethinking at an annual street festival.

Someone noticed a sign directed right at them at a local church nearby: 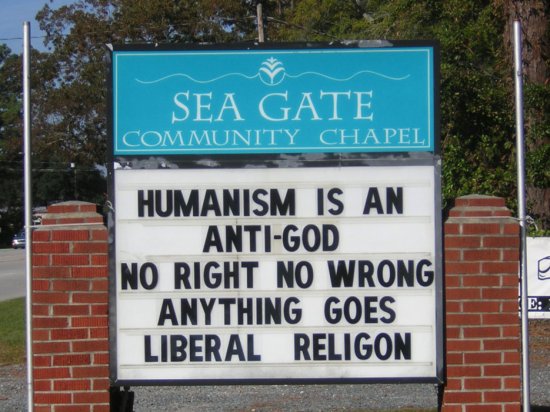 Then again, whoever wrote this clearly didn’t know the first thing about Humanism.

It’s not anti-God. You can’t be against a God you don’t believe exists.

It’s not “no right, no wrong, anything goes.” There are general guidelines and boundaries.

Liberal? Perhaps many Humanists are liberal, but what isn’t, when compared to a conservative church?

Religon? I was going to make a joke about spelling, but “reli-gone” probably does describe the wishful thinking of so many of us 🙂

(Thanks to Maggie for the link!)