My Four Seconds Next to Nicolas Cage September 26, 2008 Guest Contributor

My Four Seconds Next to Nicolas Cage

A couple years ago, a college friend of mine found out they were holding a casting call for extras for a Nicolas Cage movie being filmed in Chicago called The Weatherman.

The two of us showed up at an office building in the city, where a staffer had us both fill out forms with vital information (name, age, height, etc) and took a polaroid an inch from our face.

A few days later, I got a call saying they wanted me in the movie and that I should show up at City Hall on Saturday morning wearing “dark, but casual” clothing.

My friend didn’t get a call. (I will hold that over her head *forever*.)

I went by myself to City Hall that weekend on what felt like the coldest day I’d ever experienced in Chicago. No snow; just freezing wind like you wouldn’t believe.

We were told that the main scene we’d be filming was one where Nicolas Cage would stroll down a sidewalk, thinking to himself. In the actual movie, a voiceover would be heard with his thoughts. The extras would be the other people on the sidewalk.

I took a seat next to some other extras and minded my own business for a few minutes. Then some lady working on the movie came around and put us into groups. The people sitting closest to her were in group 1… then group 2… and so on. I was in group 3289423.

This meant I would be as far away from the camera as humanly possibly.

So I took the long walk to my designated spot away from the camera, cursing my bad luck. I came there to be in a movie and the camera wasn’t going to see me at all!

We were so far away, in fact, that a crew member told us we had no business being outside. We could go back inside where it was warm and wait until we were needed.

The other extras were thrilled at the idea of getting paid minimum wage to sit and do nothing. I was pissed. My shot at being in a movie was passing quickly.

I decided to make my move.

No one was really paying attention, so I snuck into the group.

And faced the camera.

No one called me out on it.

We began doing some run-throughs of the scene. On the cue, we were told to walk in the direction we were told. They told us to walk fast or slow or in a zig-zag manner — Look normal, in other words.

After a couple takes of this, a van pulled around to my area and Cage stepped out!… taking the spot of the man in front of me. Who apparently was his body double for blocking purposes.

I was right behind him. I’m not even a huge fan of his movies, but when he’s right there, you just sort of want to touch him…

We did a couple more takes. I figured out that when Cage crossed a particular intersection, a Chicago bus took the cue and began driving across the street. (From the camera’s standpoint, it would help make the scene environment look more like a real city.)

I realized that in order to be in the shot, I needed to do two things: cross the street faster than Cage (and then slow the hell down afterwards so he could catch up with me). And stay by his side as much as possible. He was obviously going to be in the movie… so if I stayed glued to his side, I would have to be in the movie.

And while all the other extras did their job and walked in random directions at various speeds, I stayed close to Cage. No one stopped me 🙂

It finally came to my attention that the link of my four seconds of movie-fame is on YouTube! 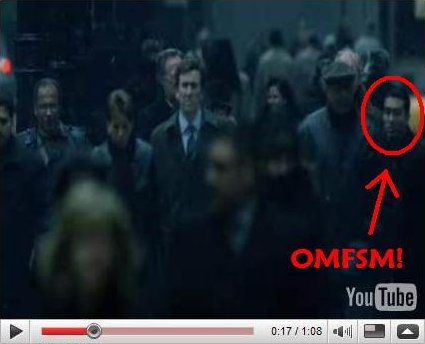