Letter from a Prisoner

I’ve written before about a student activist from Oregon, Leslie Zukor, who has been running a service project for a few years now where she donates freethought books to prisoners. It a way to counteract the potentially harmful religious literature they’re usually exposed to behind bars.

Every now and then, the prisoners send Leslie a letter of appreciation.

Leslie just passed along this letter to me — it was sent to her last week. It shows how important it is for inmates to receive freethought literature.

If you think the project is worthy, she could always use the donations. She uses a lot of her own money (and you know how much money college students have…) to ship the books across the country.

This is a project worth supporting.

The actual letter is below (click it for a larger image) and the text of it is under that (with my own emphasis): 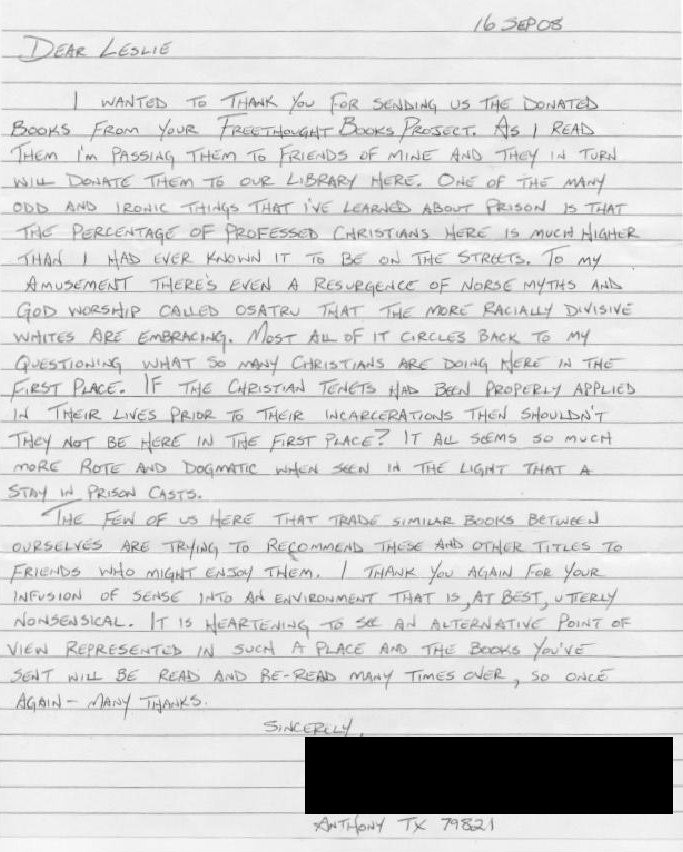 I wanted to thank you for sending us the donated books from your Freethought Books Project. As I read them I’m passing them to friends of mine and they in turn will donate them to our library here. One of the many odd and ironic things that I’ve learned about prison is that the percentage of professed Christians here is much higher than I had ever known it to be on the streets. To my amusement there’s even a resurgence of Norse myths and God worship called [Ásatrú] that the more racially divisive whites are embracing. Most all of it circles back to my questioning what so many Christians are doing here in the first place. If the Christian tenets had been properly applied in their lives prior to their incarcerations then shouldn’t they not be here in the first place? It all seems so much more rote and dogmatic when seen in the light that a stay in prison casts.

The few of us here that trade similar books between ourselves are trying to recommend these and other titles to friends who might enjoy them. I thank you again for your infusion of sense into an environment that is, at best, utterly nonsensical. It is heartening to see an alternative point of view represented in such a place and the books you’ve sent will be read and re-read many times over, so once again — many thanks.

September 26, 2008
My Four Seconds Next to Nicolas Cage
Next Post

September 26, 2008 Atheist Comedy Show in NYC This Weekend!
Browse Our Archives
What Are Your Thoughts?leave a comment