The Penn State Atheist and Agnostic Association held a fundraiser on Saturday to raise money for Doctors Without Borders.

How did group members raise the cash?

Including the Bible, the Qur’an, and The Gospel of the Flying Spaghetti Monster. 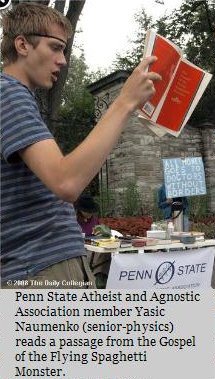 According to The Daily Collegian:

… Passersby could donate money in return for hearing club members read aloud from the book of their choice.

The “Bible-A-Thon” raised about $503, which will go to Doctors Without Borders, an organization that brings medical care to people worldwide.

Reactions to the event were mostly positive, Jackson said.

“We’ve only been flipped off like twice,” he said.

I’m really curious if any religious people heard something shocking or provocative as they walked by the reading area and inquired as to what was being read, only to find out it was their own holy book 🙂

(The PSAAA is an affiliate of the Secular Student Alliance.)

September 22, 2008
Things That Makes You Go WTF
Next Post

September 23, 2008 Survey on Coming Out As An Atheist
Browse Our Archives
What Are Your Thoughts?leave a comment