Can “Showing Love” Be a Hate Crime? September 22, 2008 Guest Contributor

Can “Showing Love” Be a Hate Crime?

The University of Alberta Atheists and Agnostics group has a large banner hanging in the Central Academic Building of the school. Displaying a Scarlet A, the group’s name, and the words “Speak Out,” it’s supposed to encourage non-religious students to attend group meetings and perhaps even come out publicly as an atheist. 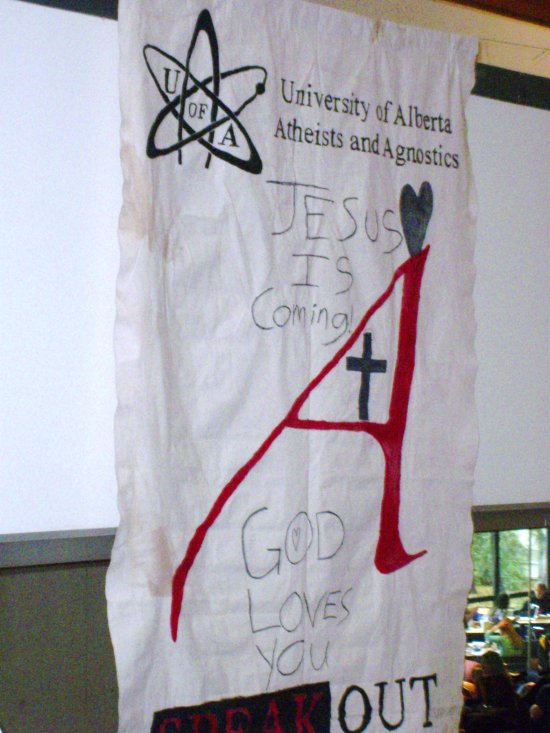 Seems like some Christians defaced the atheist group’s property by writing “Jesus is coming!” and “God loves you.” They also removed the group’s email address and website URL from the bottom of the banner.

Of course, this is wrong. No one should destroy the property of others. I’m sure if the atheists wrote “God doesn’t exist” and “Jesus is never coming back” on the Christians’ banner, there would be an uproar. I would hope the Christians responsible for this (if indeed they were Christians and not rogue atheists) have the decency to pay for the damages.

Or, better yet, imagine the positive press a Christian group would get by offering to pay for the $70 worth of damages — even though they were not responsible for the vandalism — because they respect peoples’ right to believe what they want even though they hope that belief leads them to Jesus. That would be downright Christlike…

I was a bit curious, though, about the wording of a press release (PDF) issued by the atheist group president Ian Bushfield:

The University of Alberta Atheists and Agnostics were targeted by hate-fuelled vandalism over the weekend of September 19-22 when their large banner was defaced.

Ian adds on his own site: “This is not a joke, this is a serious hate crime.”

If anything, it’s the opposite, no?

Ian’s appearing on local news tonight to discuss the incident. (***Update***: The segment was cut from the show.) Hopefully, he can help turn this problem into a promotional tool for the group — this type of intolerance is exactly why a group like his is needed on campus.

(The UAAA is an affiliate of the Secular Student Alliance.)

September 22, 2008
Provide a Caption for This Richard Dawkins Image
Next Post