Ordering A Hit on Mickey 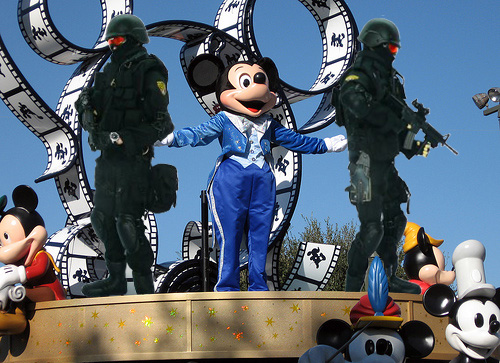 One of Islam’s top clerics, Sheikh Saleh al-Luhaidan has issued a salvo of fatwas, not only calling for the death of executives of television broadcasting companies in the Middle East but also a much more disturbing and potentially disastrous threat.

Western-style programming often in the form of  soap operas have increasingly been portraying open sexuality in their dramas viewed in several Middle Eastern countries, especially Turkey and Saudi Arabia.  al-Luhaidan has already made headlines for denouncing as “satanic” the Beijing Olympics which he called the “bikini Olympics” for permitting female athletes to compete in abbreviated uniforms. Trying to stem Satan’s further influence on the youth of Islam, the senior cleric and Chief Justice of Saudi Arabia’s Supreme Judicial Council has now taken a much bolder step.

Citing that Mickey Mouse has become an “awesome” character in the eyes of children and that shari’a law calls for the immediate death of all mice and other rodents, he called for the death of Mickey Mouse as an “agent of Satan.”

There is no confirmation to the rumors that the CIA and the Secret Service were in conference with executives of Disneyland in Anaheim, California and Disney World in Orlando, Florida, but unnamed sources have confirmed that Mickey is now wearing Kevlar body armor under his costume and that armed undercover agents accompany him everywhere in the amusement parks.

“The parks are a security nightmare,” said a Disney security official who spoke on condition of anonymity.  “The crowds are too big and anybody could have a bomb disguised as a baby or a gun or knife inside some cotton candy.”  “Mickey is in real danger.” another bodyguard said. “I gotta admire his courage to keep performing, but as a security man, I wish he’d be more cautious.”  When asked if he would take a bullet for Mickey, he gravely nodded his head and tears came to his eyes.

So far the White House has no official comment on the threat to one of the most beloved icons of Western culture, but sources close to the President say that he is “very concerned” for the safety of the Oscar-winning Apodemus Sylvaticus and that he has not ruled out the nuclear option as a response if any harm comes to Mickey.

September 19, 2008 What's Wrong with This Magazine Cover?
Browse Our Archives
What Are Your Thoughts?leave a comment