Yesterday morning, one of my students came up to me before class and said, “Mr. Mehta, we saw your name in the paper today!”

Oh crap, I thought. What did I do?

Turned out an Indian girl who shared my last name was featured in the Chicago Tribune.

Eva Mehta is a Jain (the religion in which I was raised) who happens to attend the same temple I went to as a child.

She was in the paper because she had just set a temple record by fasting for 34 days straight. 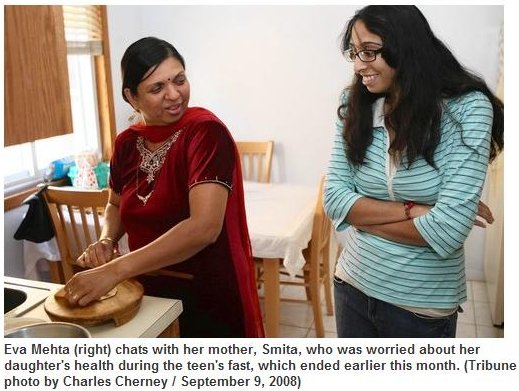 I wrote in my book that my sister Nina fasted for eight straight days for the same religious occasion — called Paryushana — and that was a major tipping point for me becoming an atheist. I thought it was a form of self-inflicted abuse brought about in the name of religion. It sickened me.

The girl in the Tribune article is 17.

At times, the 17-year-old was so weak and nauseated that her parents had to use a wheelchair to bring her from their van to their Jain temple in Bartlett. When the hunger pangs hit hard, she would pinch her ears. But she kept up her fast, even when she went to bed hungry and dreamed of food.

But Mehta’s fast stands as a temple record, a triumph of discipline and devotion, say Jain leaders, who plan to hold a celebration Saturday at the Bartlett temple for Mehta and others who fasted.

“I always tried to keep my mind, just pray to my god every day,” Mehta said recently, appearing happy and relaxed. “I would pray, just help me get rid of this feeling. I always pinch my ear and pray whenever I’m hungry.”

During the fast, Mehta says she experienced intense bouts of nausea, caused by an increase in gastric acid that occurs during fasting.

She skipped the first week of school at Evanston Township High School.

It disgusts me that her parents would allow her to go through with it. It’s sad that a seemingly intelligent young woman would think this actually helps reduce her bad karma and brings her blessings.

You have to wonder what the Jain community’s reaction would’ve been if the girl ended up in a hospital — or worse. Would they have seen her as a martyr? Would they be celebrating her record-breaking fast?

Her mother said she would have stopped her daughter from fasting if Eva got sick.

What’s worse? Knowing our Indian community, I can see plenty of other parents encouraging their own children to be just like her.

I remember complaining to my mom when she let Nina fast for over a week. They held a celebration for her at the temple. I couldn’t believe they were supporting the self-imposed starvation. Our arguments became shouting matches and they spanned several days.

When I talked to my mom about this article today — and complained about it — she wasn’t putting up much of an argument. She made a half-hearted attempt to defend the Jain practice, but it wasn’t very convincing since she was smirking as she said it.

This was idiotic on the girl’s part.

Her parents are worse for letting her do it.