Please Don’t Let People Do This To Me When I Die September 16, 2008 Guest Contributor
Patheos Friendly Atheist. ... Want more from the Friendly Atheist? Get our FREE Newsletters and special offers!

This tribute may piss you off, though:

Wallace had three planets in the sign of Pisces, his Sun, Chiron and Venus, and four planets in the eccentric zodiac sign of Aquarius, and his moon either in the sign of Virgo or Libra. As an energetic, the Sun in Pisces is difficult energy for men in general. While our society expects men to be well defined in their goals and self confident in themselves and actions, Pisces men generally are neither. They are at heart mystics and seers, with an intuitive understanding of the workings of the Universe. On the other hand, they can have some strange fascinations and addictions. They like to work in the background without much attention focused on them. Many times they are misunderstood. They also can play the part of being misunderstood as well. When pushed too hard to take on well defined societal roles, they often feel put upon and play the martyr. Chiron, the planet of unhealing wounds, sat next to his sensitive Pisces sun. The interaction of these two planets produced a need to be the focal point of attention while at the same time being uncomfortable with the spotlight turned on him. It is a strange dichotomy that may have gnawed away at his sense of self.

With many planets in Aquarius, he would have felt constricted by traditional views and societal roles. His unconventional writing style, signified by Mercury in Aquarius, made him a literary legend. His Saturn in Aquarius sitting on that Mercury made him fear that whatever he was doing was not quite good enough. His Mars sitting along both of these planets would have fueled a driving need to keep working harder and longer to resolve his perplexity at his own dilemma. He needed to be different, to break new ground, but he was faced with the constant anxiety of his own worth.

But was this an intentional suicide?

Not having a time of birth is very limiting and all we have is speculation. However, unless he was born at around 7:30 AM I think a very different thing happened. If he intentionally committed suicide, The Arabic Part of Suicide support a birth time of 7:30 AM. But that would give him a Virgo Moon and a Pisces ascendant. His facial features suggests an Aries ascendant which would also support a Virgo moon. As I said, all this is speculation, but with the Aquarian Moon, the North Node, and Neptune running over (transiting) his collection of Aquarian planets opposing his planet of accidents, Uranus, I think he was engaged in a very different kind of activity and lost control of the situation.

His loss is unfortunate for American letters and for our society as a whole.

And someone please make sense of this image: 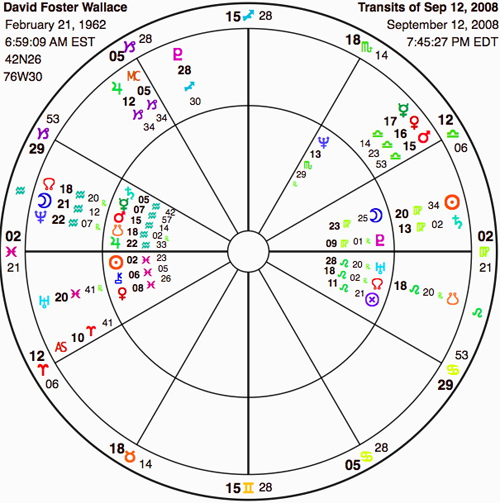 Then check out the first couple comments on that posting.

(Thanks to Beth for the link!)