***UPDATE***: This is an email from one of the protesters, Rick Wingrove, explaining why atheists need to be present at these types of summits:

An exhibitor at the Values Voters Convention in Washington DC this weekend was selling an item called Obama Waffles. It is a stunningly racist caricature of Barack Obama. The front of the box has a grinning Obama serving food. There is a menacing caricature of an angry Michelle Obama on the back. The top features a Muslim Obama with the instructions to point the box towards Mecca.

I confronted the seller, then complained to event staff and directed several cameras and reporters to the booth. By the end of the day, the event organizers made the guy close his booth and leave.

The first reaction of everyone I showed this box to was jaw-dropping shock. I confronted former presidential candidate Gary Bauer about this affront. He refused to condemn the product. If these represent the values of the “Values Voters”, I know all I need to know about their values.

At the Values Voter Summit in Washington, D.C. this weekend, a vendor was kicked out for overt racism wrapped in the guise of satire: 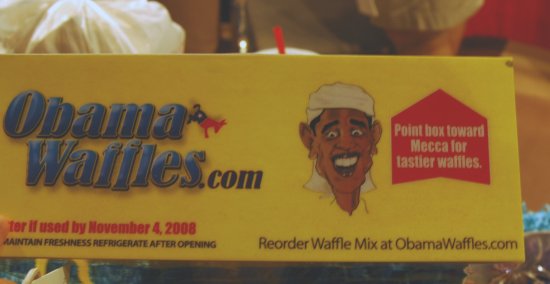 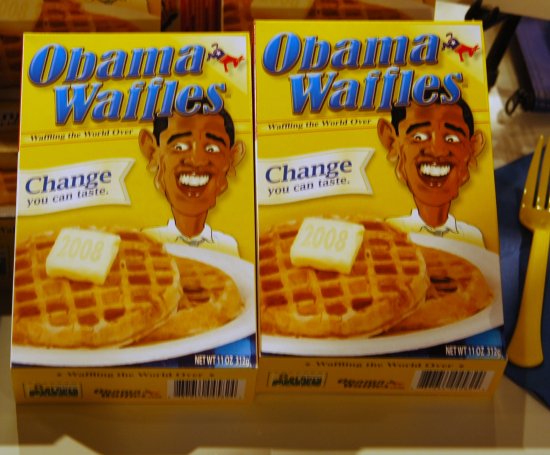 Protesters from American Atheists eventually got them removed:

Eric Herrman from American Atheists said the box was racist because it conjures up images of Aunt Jemima, the woman portrayed on a syrup bottle.

“Let’s say we sold a pig lipstick product, we probably have to leave for the same reason,” Herrman said as he handed out literature outside the Hilton Hotel. “A caribou doll would be considered so sexist.”

Herrman and two others from the organization said they sent reporters down to look at the waffle mix. When they found out that the vendors were asked to leave, they high fived each other.

The high-five is quite tacky, but yay for being successful.

The guy who created the product sees nothing wrong with it:

Bob DeMoss, who created the product and said the boxes have been called racist before, packed up his boxes this afternoon.

“What’s wrong with Aunt Jemima? I always looked at that as a symbol of quality. Betty Crocker or Emeril’s are made up characters. They don’t get it.” he said. “It’s unfortunate; they have their freedom of speech and it’d be nice if we had ours.”
obamaposters.jpg

DeMoss said that some have been offended by the top of the box.

“Does he have Muslim roots or not? That’s a legitimate question. That might offend somebody, but you know what, that’s part of the political satire and we’re raising the question,” DeMoss of of Franklin, Tennessee said. “I’m not questioning where his soul is today, he denies he has any Muslim roots at all. There seems to be contrary evidence to that.”

At least the director of Family Research Council Action (David Nammo) is speaking out against the waffles:

“We strongly condemn the tone and content of materials that were exhibited by one of the vendors at this weekend’s Values Voter Summit. The materials represent an attempt at parody that crosses the line into coarseness and bias.”

“The exhibitor contacted our reviewer just days before the Summit by email and described material that sounded like it was devoted to political flip-flops on policy issues. When the content of the materials was brought to the attention of FRC Action senior officials today, they were removed and the exhibit was dismantled by the vendor at our insistence. It is our responsibility to fully vet materials that are offered at any event we cosponsor, but we are deeply dismayed that this vendor violated the spirit, message and tone of our event in such an offensive manner”…

I don’t care so much about the waffles. But for the creator of the product to seriously think Obama is still a Muslim? That’s incredible to me.

How on earth can some people swim in that much ignorance and not even know it?

September 13, 2008
Julia Sweeney on the New Season of SNL
Next Post