After quite a bit of drama, American Atheists has chosen a new president: Dr. Ed Buckner. 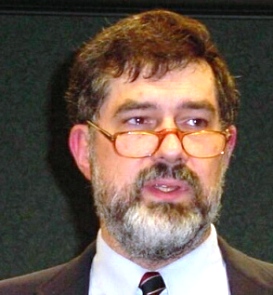 I’ve met him once, a few years ago, at the Lake Hypatia advance (not a “retreat” — atheists don’t retreat) sponsored by the Freedom From Religion Foundation. He was a nice guy when I met him, and based on what I’m hearing from leaders of other organizations today, my experience is shared by many others.

What should we know about him?

Here’s what Ed pledges to do as president:

I’m not Frank Zindler or Ellen Johnson or Jon Murray or Madalyn Murray O’Hair, and I won’t pretend to be — but I hope to demonstrate that the best days of American Atheists are ahead, not historical. I’m grateful, and I think all of us should be profoundly grateful, to our previous leaders, who have stood strongly and proudly for us, helping us protect our rights, our reputations, and our freedom. All of them have demonstrated wonderful creativity, wit and humor, extraordinary intelligence, and profound courage on our behalf.

Many of you who are active in the movement will know of Dr. Buckner’s accomplishments, originating in the Atlanta Chapter of the Society of Separationists (then an American Atheists affiliated corporation), helping to grow the Atlanta Freethought Society through its formative years, and then most recently serving as the Executive Director of the Counsel for Secular Humanism.

A hardcore Atheist, Dr. Buckner has written, spoken, debated, and appeared often in the media, both locally and nationally. He has been on MSNBC, Good Morning America, CBS Evening News, Fox News, the Michael Medved Show, CNN, the national CBS Radio News, NPR, and on nearly every local media outlet (radio or television) in the Atlanta and Buffalo areas, most repeatedly. He’s been quoted, sometimes at length, in newspapers all over the nation and, occasionally, elsewhere in the world, been a featured guest on many Internet broadcast shows, and given the keynote address for Atheists Alliance International.

After a grace period, I look forward to seeing what Ed can do with the organization. It’ll be nice to once again see AA playing a major role in giving atheists a voice. And I hope to see donors come around to supporting the group again.

I wish Ed the best of luck in his new position!

For those interested, one major change has been made to the position itself. Previously, the president of American Atheists was essentially president for life. There were no elections.

Now, the president will have a three year term with the possibility of re-election. I’m not sure whether the election is open to the membership or whether the board of directors will elect the president, but in either case, it’s a welcome change.

September 12, 2008 Atheist Threatens Two Christian Women?
Browse Our Archives
What Are Your Thoughts?leave a comment