This Must Be the Most Uncomfortable Math Class Ever September 11, 2008 Guest Contributor

This Must Be the Most Uncomfortable Math Class Ever

That shouldn’t be any cause for concern, right?

Isn’t it just my freedom of expression?

Even if you agreed with me, you’d say my banner should be taken down and I should be reprimanded. Who am I to force my views upon my students? Students would feel intimidated by me (if they were religious). They would rightfully be concerned that their grades would be affected if they dared to disagree with me.

The banner has no business hanging in any classroom. What does it have to do with math, anyway?!

Conservative Christians would agree, too, I imagine.

But what if I Jesufied my banner?

Could I hang that one up instead?

You would hope the same religious conservatives would be opposed to this banner as well — they might agree with what it says, but even they would say it goes too far, right? If this banner was allowed, imagine what else could go up on the walls! 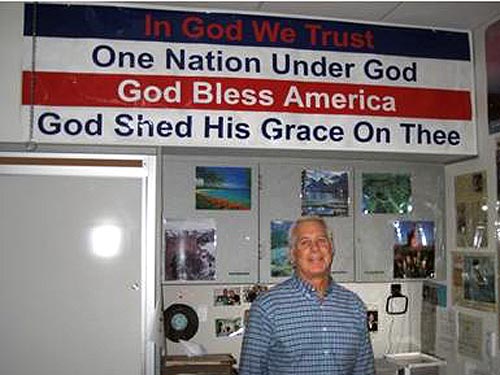 Standing in front of his Christianized banner.

… [Johnson] had the banners up in his classroom for two decades, but last year the principal ordered him to take them down, saying they were an impermissible attempt to make a Judeo-Christian statement to his students.

So Johnson sued. He said he had a First Amendment right to have the banner up.

The school countersued to dismiss the lawsuit.

Guess which way the judge went?

In a blistering 23-page decision, U.S. District Court Judge Roger T. Benitez rejected the district’s motion as legally faulty and blasted its “brash” attempt to take down the banners. The jurist noted that the district allowed other teachers to put up posters with Buddhist and Islamic messages, posters of rock bands including Nirvana and the Clash, and Tibetan prayer rugs.

“By squelching only Johnson’s patriotic expression, the school district does a disservice to the students of Westview High School, and the federal and state constitutions do not permit such one-sided censorship,” Benitez wrote in a ruling issued last week.

So this has nothing to do with religion, according to the judge. It’s about “patriotic expression.”

Sandhya Bathija of Americans United for Separation of Church and State explains the problems with this ruling:

First, Benetiz’s interpretation of free speech is worrisome. The court is wrong to claim that Johnson’s messages on the school’s bulletin boards are his own private speech. If what teachers said and displayed in classrooms during class time were merely private speech, they would be free to talk about their religious beliefs, to teach creationism and to hang Bible versus all over the classroom. Numerous other courts have said teachers don’t have this right and have upheld the ability of school officials to crack down on in-class proselytism.

Second, the school board should have known better. The district has a policy allowing teachers to display personal messages reflecting their social values and political opinions on their classroom bulletin boards. According to the decision, other teachers displayed Buddhist and Islamic messages, as well as Tibetan prayer flags. The district is practically begging for trouble.

Finally, the court said the banner is OK because it is the teacher’s “personal” message, but how are students supposed to know that? Johnson does not own the classroom, so one could be forgiven for thinking that his gigantic red-white-and-blue banner strung across the wall is really the school’s endorsement of religion.

The answer here is to remove all “personal” religious messages from display at the school, be they Christian or non-Christian. Teachers could still use religious symbols and texts when instructing objectively about religion, and they could keep religious material around for personal use during breaks, but nothing like proselytism should be permitted.

If this ruling stands, things will only get more chaotic.

It should be noted the case has not yet gone to trial; however, the school district’s request to reject the lawsuit has been dismissed by the judge.

Maybe I should ask the Thomas More Law Center to defend my right to to keep an atheist banner in the classroom.

Or maybe I should just have the decency to keep my personal beliefs out of the classroom and teach the children the math they came to school to learn.

September 11, 2008 Something Got Lost in Translation
Browse Our Archives
What Are Your Thoughts?leave a comment