Imagine No Religion Ad in the New York Times

In case you didn’t pick up a hard copy of today’s The New York Times today, you missed a full-page ad (PDF) placed by the Freedom From Religion Foundation: 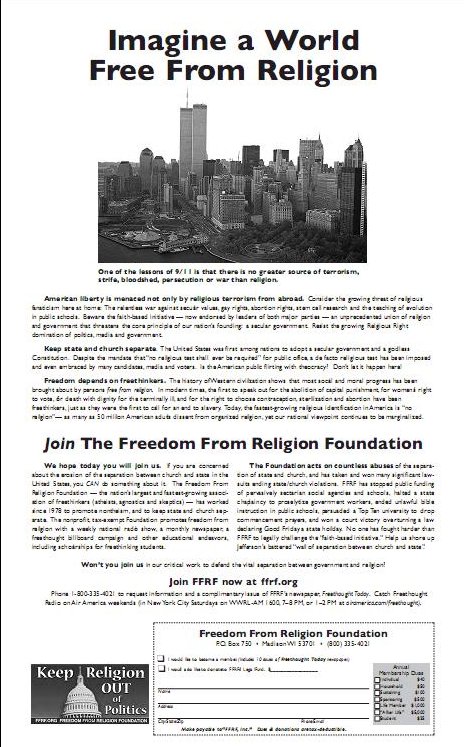 “One of the lessons of 9/11 is that there is no greater source of terrorism, strife, bloodshed, persecution or war than religion,” the Foundation ad points out.

“If there were no religion,” Dan added, “it would not automatically solve all our problems, but it would make them so much easier to address.”

“In this approaching seventh anniversary of the terror attacks, the role religion plays in creating terrorism and division is that proverbial 800-pound gorilla in the room,” said Foundation co-president Annie Laurie Gaylor.

The ad points to “the growing threat of religious fanaticism here at home,” the de facto religious test for public office being imposed on candidates, and asks: “Is the American public flirting with theocracy?,” adding: “Don’t let it happen here!”

“This is a bold stroke to remind people of the elephant in the room,”
declared American Humanist Association President Mel Lipman. “People don’t crash airliners into skyscrapers in the name of science or in the name of those common decencies we all believe in. But they can do it when prompted by blind faith in the unseen and unproven.”

This is the anniversary week of 9/11 during which a special memorial will open at the Pentagon in Arlington, Virginia.

“The FFRF has our congratulations for their frankness, honesty and courage in generating discussion on this important issue,” added American Humanist Association Executive Director Roy Speckhardt. “It is efforts like these that have helped more and more people take an honest look at how religious fanaticism can lead to the destruction of humane values.”

Early word is that the ad is generating a lot of interest and donations for FFRF.

The more support they get for this, the more likely they are to take the risk to do it again. It’s a huge investment, but hopefully, the response is worth it.

I’m sure FFRF would appreciate your thoughts on the ad (and, if you’d like, your contributions as well).

September 9, 2008 Atheist Groups in the News
Browse Our Archives
What Are Your Thoughts?leave a comment