Atheist Groups in the News

There are atheists in Idaho!

The Boise State Secular Student Alliance is now open for business. (All they need is approval from the university… which should simply be a formality.)

[President Lloyd] Lowe posted flyers around campus and found agnostic and atheist Boise State students on Facebook two weeks before the fall semester started. The BSSSA attended the Student Organizations Extravaganza Aug. 24 and held a booth on the first day of school with a sign that asked “Outgrown Your Imaginary Friend?”

This was not meant to be controversial, but to gain attention and acknowledge the presence of non-religious students on campus. More than 50 students showed interest during these campaigns.

“Our group’s main goals are to bring together secular students of all types in order to support each other and present a positive view of non-belief to the community. We intend to promote and practice the open, rational and scientific examination of the universe and our place in it, while offering plenty of social gatherings for BSU students and the community,” Lowe said.

Best of luck to them; congratulations are certainly in order for getting an article in their campus newspaper (by reporter Mat La Rue).

If you’re in the area, join their Facebook group and attend future meetings!

In other news, three babies are missing.

The barbecue was thrown by the Central Valley Alliance of Atheists and Skeptics.

Mark Boyd helped found the group and he spoke to The Fresno Bee‘s John Ellis:

“It’s a conservative city,” Boyd said of Fresno metropolitan area. “It’s good to have a way to find each other.”

On Sunday, about 30 people — some card-carrying members of the group, some simply curious — gathered at Letterman Park in Clovis for discussion, some debate and even a bit of chess.

Many Christians might well have been shocked by the conversation. But know this, too: believers in Bigfoot, homeopathic medicine, unidentified flying objects, ghosts and male enhancement drugs would likely have been offended as well.

That’s because it wasn’t simply a religion-bashing contest. Other areas some dubbed “pseudo-science” also were bashed.

My favorite paragraph was this one:

That includes people like Fresno writer Nick Lewis, who won a Bible at his church as a youngster and was turned off by the words inside. “I was born an atheist,” he said. “No one’s going to change that.”

Beautiful irony: A Church-sponsored Win-a-Bible contest that turned the winner into an atheist.

The CVAAS group was also handing out lovely “Get Out of Hell Free” cards, which are fantastic handouts if you are ever tabling on a campus. 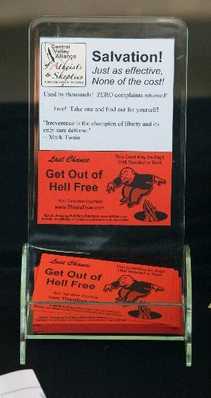 (You can get those cards here.)

September 9, 2008
Imagine No Religion Ad in the New York Times
Next Post