Friendly Atheist Contest #34: Worst Ways to Come Out as an Atheist

This weekend is the Atheist Coming Out Party in Columbus, OH.

This raises the question:

What is the worst way to come out as an atheist?

It can be a statement, a dialogue/scene, a sign, etc. The question is open to interpretation!

Here are the Top 5 ways (with submitters): 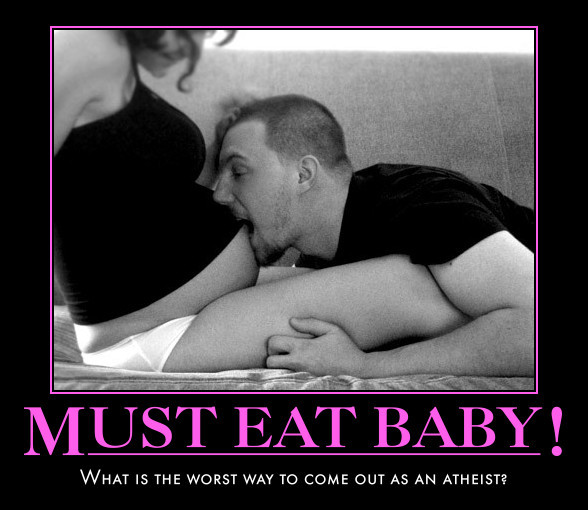 “I accept your nomination for President of the United States and look forward to becoming the first atheist to serve in the White House.”

So there I was, hanging out with Pat Robertson, Rick Perry, and Fred Phelps on a hunting trip deep in backwoods Alabama, to which I said “Boy, who would imagine an atheist would get the chance to hang out with all of you!”

Trip and fall onto a table, crushing a plate of communion wafers, the other end of the table flips up and a bible flies into the fireplace and is consumed by flames and also the table hits a woman holding a baby and it soars straight into an open microwave oven. Throw up your arms and exclaim “It’s ok! I’m an atheist!”

Atheists were not invited to the Democratic National Convention’s Interfaith Gathering.

What other events are atheists not being invited to? Why not?