Jesus Christ Had a Homosexual Relationship?

At Lorain County Community College in Ohio, the Campus Activists for Atheism group is causing a stir because a poster for the club makes reference to a passage cut from the Bible.

“Cut from the Bible”?

[Group secretary and treasurer Christopher] Burns said most Christians have never heard of the Secret Gospel of Mark, which was found inscribed in a letter by Greek historian Clement of Alexandria. The letter has been disputed for decades and is now lost, with only photographs of the passages remaining for study.

One text from the letter hints that the Bible’s account of Mark’s gospel originally told the tale of Jesus raising a man from the dead and then having an intimate relationship with him, said Aaron Weaver, a senior at LCCC and president of the college atheist club.

The poster they put up around campus looked like this: 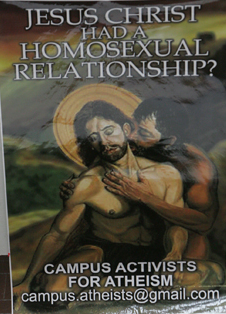 The reaction was what you would expect:

Students stopped to gawk, then grew angry and very vocal about the statement made by the poster.

Campus security guards said offended undergrads voiced complaints for about three straight hours, but the sign remained up because it didn’t present a security issue.

Don’t think the group is just picking on Christians, though:

On Wednesday, [Weaver] put up a picture of the prophet Mohammed — an act strictly forbidden in the Islamic faith.

He said that about 2:20 p.m. Wednesday, he received a death threat in response to the picture, which read, “With love and missiles.” He took the picture down, turned over the note to campus security officers and went home.

“I put myself at risk, but I do so freely. I don’t let fear or the threat of death stop me from speaking my mind freely,” he said.

It’s all designed to make people question the beliefs they’ve grown up with. No atheist on campus is physically attacking anyone — just raising questions. And doing that should hardly be considered offensive — maybe in church, you wouldn’t be able to raise this subject, but at a university? It should be fair game.

Christians on campus are making a big mistake by saying this poster should be taken down. The smarter thing to do would be to point out why the Secret Gospel is false and should not be taken seriously (if that’s the case). Use that Bible knowledge, let the atheists know you’re not afraid of any Christianity-related questions or challenges, and confront the atheists at their own game. Use this poster to your advantage, instead of reacting like a whiny child.

But no one in any article I’ve read about this story is doing that. All we hear are remarks about how offended everybody is:

Student aide Jessica Hodge said she felt the poster would “pollute the minds” of her children, ages 2 and 5, if they saw it.

“It looks like soft-core pornography,” she said. “I don’t think they’re making a statement at all. They just want to shock everyone.”

“You can’t portray Jesus like that. He believes in matrimony, that relationships like that should be done inside matrimony,” sophomore Brianna Holland said.

Freshman Markita Montague says “I feel sorry for them because they don’t know all that Jesus Christ has done for us.”

Some christian students suggest the atheist group simply craves attention and the best approach is to ignore their rhetoric.

Ignoring their rhetoric would be a completely missed opportunity for the Christians.

And while it’s definitely at the certain of attention now, Campus Activists for Atheist had a rough time starting their group last year:

“We had an unnecessary rough time getting started as a club. It took us a half an hour just to get 10 signatures from students on campus to just get the process started. The closed-mindedness that we encountered was disturbing; it truly brought shame to this college campus,” said Weaver.

Since Weaver and other members had so much trouble getting this club amended, Weaver was asked whether or not atheists are well represented in the community.

“Of course not. Closed-minded people tend to view atheists as having horns and carrying tridents. It is ludicrous, yes, but many people care not to educate themselves on the thoughts and views of other people. We are here to change that; it’s time people learned to grow up,” said Weaver.

With the attention they’re getting from this poster, and with the (hopefully) increased attendance at their next meeting, I hope they’ll do something that invites a much more positive dialogue between people of other faiths and no faith.

Show everyone that, while a poster may be “controversial,” the discussion about religion and beliefs is nothing to shy away from.

(Thanks to Shane for the link!)