The Five Most Important Days for Atheists from the Past Decade July 10, 2008 Guest Contributor

The Five Most Important Days for Atheists from the Past Decade

Discuss, praise, criticize, do what you will.

My list of the five most significant moments in atheism from the past ten years:

More than five years after O’Hair, her son, and her granddaughter had “vanished” from the Austin, TX headquarters of American Atheists (which O’Hair had founded), forensics experts identified a set of bones found at a ranch outside San Antonio as those of the murdered atheist family, finally putting an end to the horrific saga — as well as rumors that they had fled the country. It also signified the end (literally and figuratively) of O’Hair as the unofficial spokesperson for atheism.

David Waters, one of the kidnappers and former AA office manager, died in 2003 while in a prison hospital.

On this day, over two thousand non-religious people gathered on the Mall in Washington, D.C. to rally for church/state separation and show Americans (and our elected officials) that we deserve to be heard.

Not every aspect of the event was received with open arms by everyone — including the non-religious. In fact, it was due to the “negative” connotation of the word “Godless” used in the event’s title that a more “positive” movement called The Brights was born.

In late 2006, the Secular Coalition for America held a contest to identify the highest ranking, openly non-theistic elected official in America. The winning entry was not the name of a local mayor, school board president, or dogcatcher, as some might have thought. Instead, it was a national congressman from California, Pete Stark, who issued a statement regarding his non-belief in a Supreme Being thanks to the SCA’s work.

Even more amazingly, this announcement was fairly uncontroversial, perhaps signaling that non-religious people will be able to play a role in national politics in the future.

Incidentally, Stephen Colbert mentioned Stark in his book I Am America (And So Can You!):

Card-carrying members of BS [Big Secularism] have snaked their way into every branch of the federal government, except for the judicial and executive. Did you know that in the House of Representatives and the Senate, there are as many as one self-described atheist currently serving? Democratic Representative Pete Stark of California’s 13th district, to name just one. Just think of it — how are any pro-faith initiatives going to make it into law when Congress is held hostage by the anti-God caucus of Stark, his self and him?

There’s not much to say about this day that hasn’t been said already, so I’ll keep this short. For many people, this may have been the first time they saw the extent of how evil religion could be: What can happen when religious beliefs go unquestioned? Of course, religion wasn’t the only reason for the attacks, but it’s tough to deny its central role.

In addition to the attacks themselves, Christian fundamentalists like Jerry Falwell and Pat Robertson made their viewpoints seem more demented than usual by blaming “abortionists,” “feminists,” and “gays” for what happened.

While I obviously wish these attacks had never happened, I would guess that more atheists were “born” on this day than any other in our nation’s history. 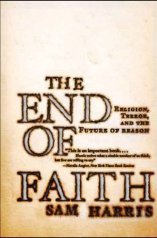 While other books about atheism were in the works when Harris’ came out, his was the first in recent memory to bring no-holds-barred atheism and criticism of religion to the masses in a way no one else had done. He also inadvertently helped introduce a new genre of books, making publishers everywhere want to put out more of the “New Atheist” literature.

Thanks to Harris and those whose books came out soon after (e.g. Richard Dawkins and Christopher Hitchens), atheism was the subject of magazine covers and lead stories, and the authors’ success re-energized a number of Christian apologists to write “response” books of their own. You will see dozens of popular books on atheism over the next several years, and they exist in large part due to the success of The End of Faith.

There are a few other major events not on the list that still warrant mention:

August 23rd, 2007: Mother Teresa’s letters are made public, revealing that she had “felt no presence of God whatsoever” for approximately the last 50 years of her life. It’s debatable how much impact this revelation had for proponents of atheism.

June 26th, 2002: Pledge of Allegiance found to be unconstitutional due to “Under God” phrase. The decision was eventually reversed by the Supreme Court — they said atheist Michael Newdow did not have legal standing to bring the case on behalf of his daughter because of a custody dispute.

January 13th, 2006: Freedom From Religion Foundation wins court case to allow taxpayer challenges over violations of the First Amendment Establishment Clause — including being able to sue the White House over faith-based initiatives. This case was later taken to the Supreme Court… which unfortunately ruled against FFRF (PDF) in 2007.