Razib at Gene Expression used data from the General Social Survey for certain religious denominations and compared them to the proportion of followers in that faith who believe the Bible should be interpreted literally.

He put IQ levels on the vertical axis and the percent of Bible-is-literal believers on the horizontal axis.

Here’s what he found: 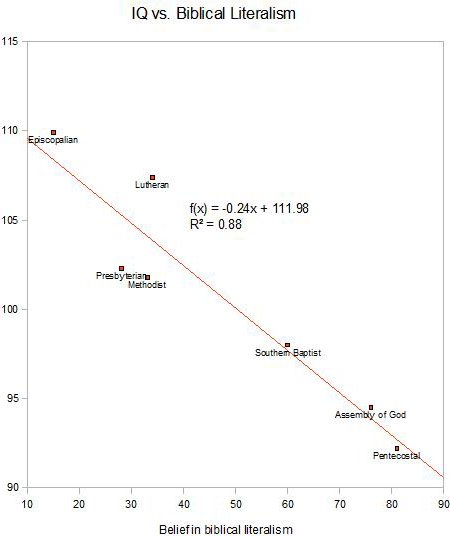 As Razib writes, it’s not strictly causation/correlation (emphasis his).

… The correlation here is probably not one of simple causality in either direction. It seems the most plausible model is one which notes that various denominations tend to have particular socioeconomic profiles which shape a general cultural outlook…

… Mainline Protestant denominations and Roman Catholicism has relatively high educational standards for its clergy and theological professionals. At the other end of the spectrum many evangelical Protestant sects have no such requirement. The Assemblies of God is a good example of this phenomenon, in this sect higher educational experience can even be perceived as corrupting. There is a reason for this perception: education, wealth and acceptance does corrupt and assimilate. 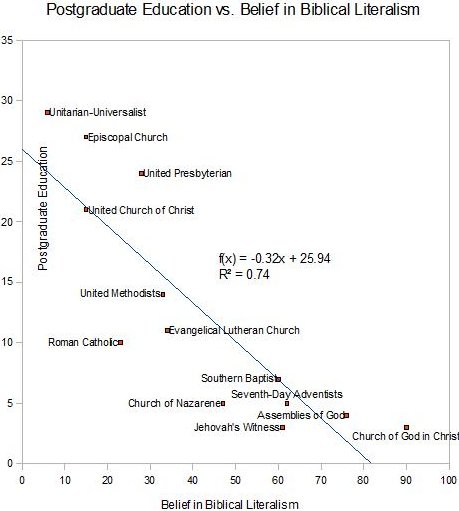 Are there any other explanations for the data results?

Is the IQ a fair way of testing intelligence in this case? Or should another system be used?

I wonder where atheists would be on the charts… and why that would be the case. According to the Washington Post, “28 percent of atheists have post-graduate degrees or professional training.” And I’m guessing little regard for Biblical literalism. Which would put us just to the left of Unitarian-Universalists in the image above.

I can’t find a good source that shows an estimate for the IQ of atheists.

(via The Daily Dish)